The original box cover that contained the diskettes, map and manual. Another great example of how video-game art in the 80s never looked like the game. 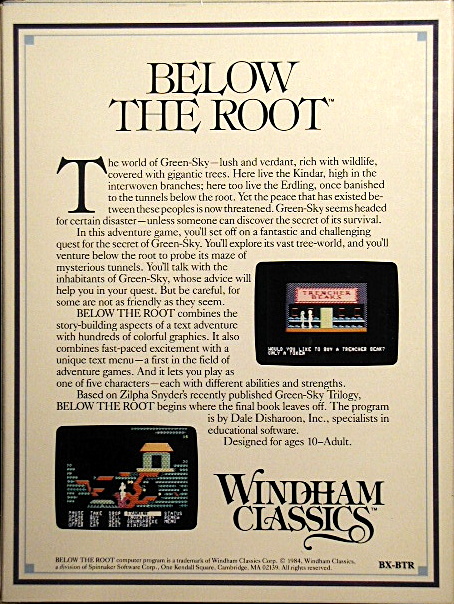 The back of the box usually showed some real screen shots.

I was 10 years old when I discovered Below the Root. It was 1984, and it arrived as some trial educational software in the mail (the other game was T.Rex The Dinosaur Survival Adventure for the Apple II.)

I got my friends hooked on it, and it wasn't easy to solve. Even though T.Rex was cool, it was quickly forgotten, while the mysteries in Below the Root just kept unfolding.

Climbing into the clouds

Below the Root was perfect for kids our age: exploring a giant treehouse world filled with clues and mysteries. What any kid wants to do is climb ever higher, and in the game, it seemed that's where we were supposed to go. And so we went, high in the trees, to a tiny treehouse that was hard to reach. The first time we were turned back by a message that we needed a "trencher beak" to cut through the overgrowth. 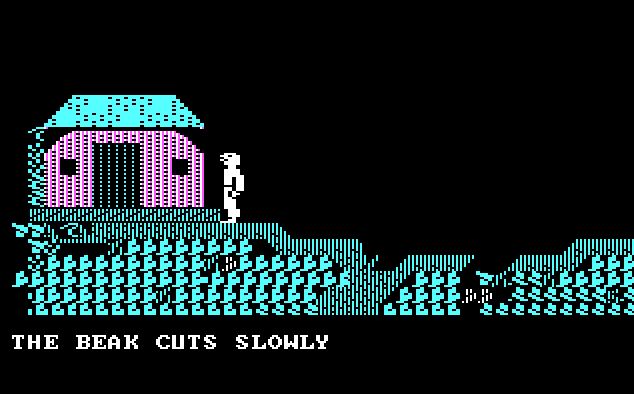 This screen grab from the PC version shows the little house after using the trencher beak to cut the vines.

Inside there was only a bed. We went in and out of the house disappointed that a place so difficult to reach had nothing inside. Eventually we figured it out: we used the "rest" command to sleep in the bed. Nothing happened. But then when we left the house, we were no longer high in the trees. The little house exited into dream world up in the clouds.

It may not look like much now, but in 1984, this cloud level left us in a state of awe. I remember controlling the keyboard, but my friend was captivated just watching. It felt like decrypting a message or finding a secret passage. The game, already vast, just kept revealing this amazing depth.

The characters are missing from the scene because the image comes from the secret level editor in the Commodore 64 version which I discovered here at The Cutting Room Floor, and helped to further document. 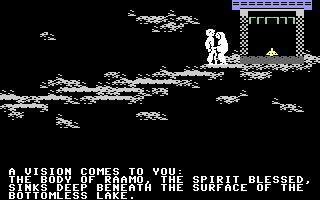 Here's how it looked during the game, when you met D'ol Falla.

Inspiration for an animated cartoon

Fifteen years later, my first Ange Terrestre animated cartoon was inspired by those cloud steps in Below the Root. 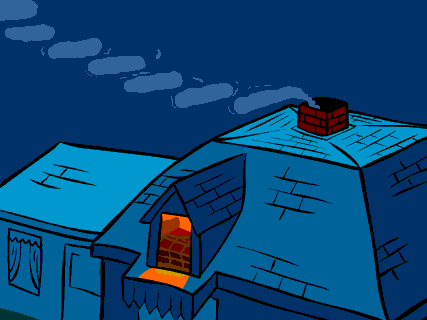 Twenty-five years after I first played Below the Root, I had gone beyond Flash animation and learned lots of scripting in ActionScript 3.0 and some JavaScript due to the emergence of HTML5. It was time to make my own game, but not a modern 3D first-person shooter. I wanted to make the pixel games I grew up with.

The success of the iPhone App Store created a new market for simple apps. It was like déjà vu, because for a short time, there was a market for software that could be made by one person instead of huge teams of programmers, just like it was back in the early days of computing.

Below the Root was programmed by one person: Dale Disharoon (Jim Graham, Leonard Lebow and Vince Mills helped with the ports to the IBM PC/jr and Apple II). This feat is even more amazing because the technology in 1984 was more limiting than it is today, and there was no Internet when you got stuck. Oh, and no game engine like Unity to build upon either, just Assembly language and graphing paper.

Indie games and the App Store

I wanted to hop on the indie-dev bandwagon while there was still a mobile-app wild west, because I knew it wouldn't last. Soon everything would become complex and only game studios could compete. Despite the excitement, smartphones were not making it easy to do nostalgia. Arcade games translated terribly to touch screens. It was common to see virtual joysticks and D-pads à la Nintendo in the corner of the game screen, but with no haptic feedback, it was about as rewarding for the brain as petting a cat on TV. And smartphones were too small. It seemed the best thing to do was to create new games tailored to the new hardware like accelerometers and the ability to swipe or use multitouch.

The iPad came out on April 3, 2010, and suddenly I was interested again. I missed out on the iPhone surge, but now I had a second chance. I was in the middle of a developing the game Quexlor as part of a group project for the iPhone Game Kit using Objective-C and the Cocos2D for iPhone graphics engine. I now felt comfortable building apps in XCode, but something new was on the horizon: Android. At the same time, I started doing web development at my job, and it seemed like HTML5 was going to allow people to build apps in Javascript using web technologies, and package them for whatever smartphone you needed. I made the switch to the ImpactJS game engine which was 100% Javascript.

Below the Root for the iPad

On September 8, 2010, I asked Zilpha Keatley Snyder if I could acquire the rights to remake Below the Root as an iPad game. Here's her response:

RE: Below the Root for iPhone/iPad

Four years after this e-mail exchange, on October 7, 2014, Zilpha Keatley Snyder died. I never did get any more information about the rights, but I kept learning more about HTML5 games.

With a Below the Root port or remake on the back burner, I decided to work my own project using a different style, graphics and story. After a few years, I wasn't happy with the graphics and went back to the Below the Root tileset and finally created the The Dreamsong. The game is inspired by Below the Root, but with different gameplay (no shubas or crawling), characters and an original story.

Below the Root game map

As I wrote on The Cutting Room Floor, a site devoted to video-game easter eggs and backdoors, I was able to extract the sprites and create a sprite sheet for all the graphics in the original Commodore 64 version of the game (the Apple II and PC versions had inferior graphics and sound).

But I was also able to create a map of the entire game by making screen captures of all the 512 possible screens. While many montages exist of the tree world, I believe I am the first and only person to create the map showing all the interior rooms just as they were mapped on the disk. What I discovered is that the areas inaccessible to the game characters by climbing through the trees are reserved for the interior scenes. My map also shows some duplicate screens, such as the very ending where Raamo is found. There is also at least one unused screen in the far bottom-right that contains just a few horizontal bars. 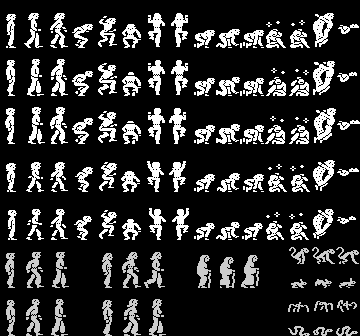 And here are all the sprite characters in Below the Root.

I compiled these sprite sheets and believe them complete. In the game, some of the animals and people have different colours, but that is done by software at run-time, meaning there is only one spider and snake sprite, and a parameter determines the colour in which it is rendered. 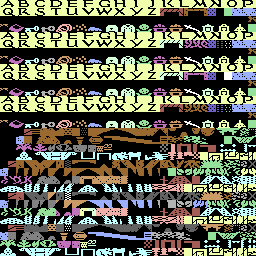 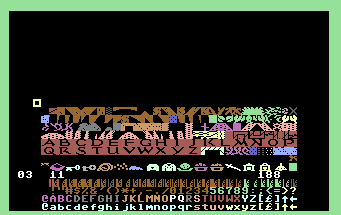 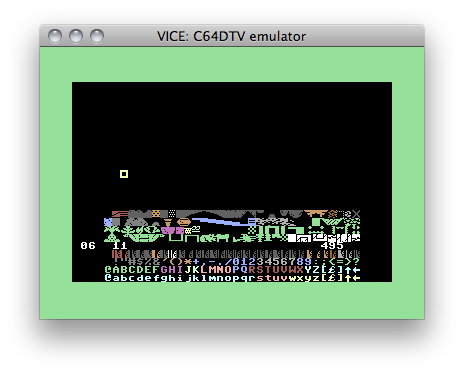 The entire tree world was created with this sparse tileset. With these graphics, I believe I have done all the ground work required to recreate the original game, if ever one were to attempt it. 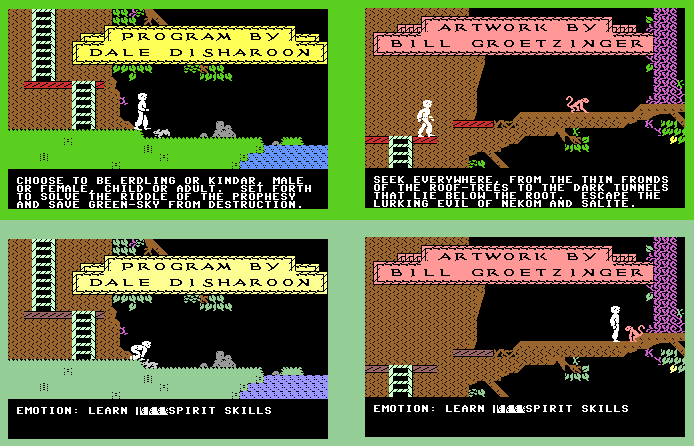 I always wondered what would happen if you could "pense" the animals in the title screen. Well, with the level editor, you can, but it creates a graphical error. I assume no one ever made a message for these title-screen creatures and when the program attempts to address the space in memory reserved for pensed messages on a given screen, there was either nothing, or the memory address was used for something else and that translated to a graphical error. 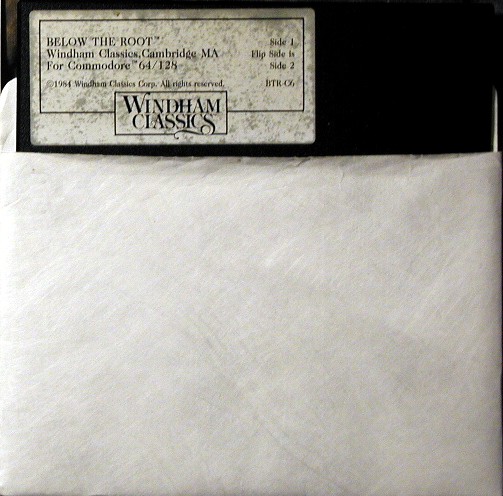 Before the game was The Green Sky Trilogy

Zilpha Keatley Snyder wrote these three books that tell the story on which Below the Root the game is based. I've read them and they're worth reading if you like the game. There was also a twist regarding the Wand of Befal and the secret locked-up weapons room that wasn't obvious if you only knew the game. It suggests that the people fled their home planet and settled in the tree world with low gravity that is the setting of the story. The ban on violence is due to their collective past on another planet.

Music inspired by Below the Root

Prepare yourself for a brooding, cinematic adventure below the root.
Listening on headphones in a darkened room is encouraged.

The title is based on a game from 1984 with the same name. The game’s story takes place after the Green Sky Trilogy of novels by Zilpha Keatley Snyder. It was one of the first open-world games where you could travel in any direction right from the beginning, presenting a very large gameworld for its time.

As a child, the game fascinated me, but not entirely due to the vast land to explore. I often pondered what lay beyond the gameworld’s borders. This music is an aural representation of what one might discover.

In fact, the video game picks up where the Until the Celebration leaves off, and is considered canon: a fourth story to "fix" the plot choice the author felt was a mistake.

The original books are back in print and available from Amazon: