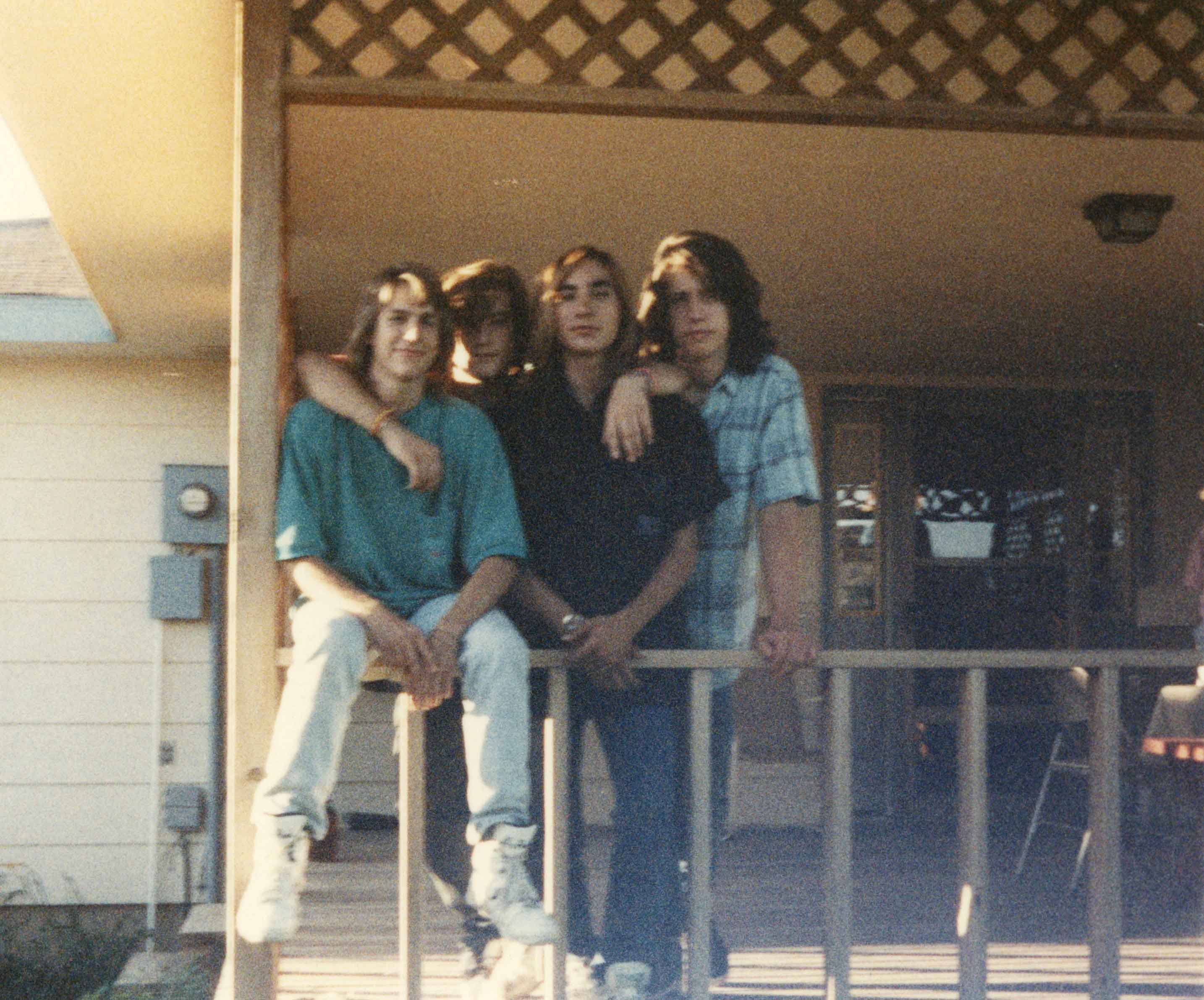 Total Eclipse in 1989 or 1990 in the back yard at my house in Hays, KS: Justin Stahlman, Tom Wooldridge, Jason Johannes and Dave Spalsbury.

The beginning of a life in rock

Around 1984 MTV started playing hard rock. I absolutely loved Ratt, and sort of liked Twisted Sister. But it was in 1986-87 that I got seriously into metal when I heard Iron Maiden’s Somewhere in Time. I also bought Poison and Megadeth around that time.

There was a school dance when I was about 13 or 14 and Troy Dechant’s band Broken Promises played. They dressed like Poison and played songs that everybody knew, like Def Leppard and Bon Jovi. I was blown away. First of all, they looked cool and confident. Second, I remember that they sounded just like the real bands. If normal guys only a few years older than me do that, then maybe I could too. The thought of being on stage... it was loud and dangerous, and I knew I had to be part of it.

in 1987 GNR released Appetite For Destruction. I didn’t like it at first, but it was so authentic, and the intensity affected me. I wanted to be Axl Rose. I started growing my hair out.

My friends Jason Johannes and Joshua Richards played guitar and set up a jam with another friend Chris Cooper on bass. When I heard they were going to do a GNR song, I suddenly felt excited, but anxious to be left out of something awesome.

By the time I saw them practice, Dave Splasbury was playing bass and Tom Wooldridge was on drums. They jammed in Jason’s basement. They had a singer named Nick Basgall whose dad worked at a computer store on Main Street. I was impressed to hear my friends playing riffs from the bands we knew. Everyone was kind of excited and kind of trying to be cool. I hoped I could get a chance to sing.

At some point Nick was either tired or just let me have a try. I picked up the mic and we did something from Appetite for Destruction. Probably Sweet Child O’ Mine or Welcome to the Jungle. Or My Michelle. Whatever it was, I remember that everyone thought I was good. Even Nick, I think. Nick was out, and I was in. I was in the band. 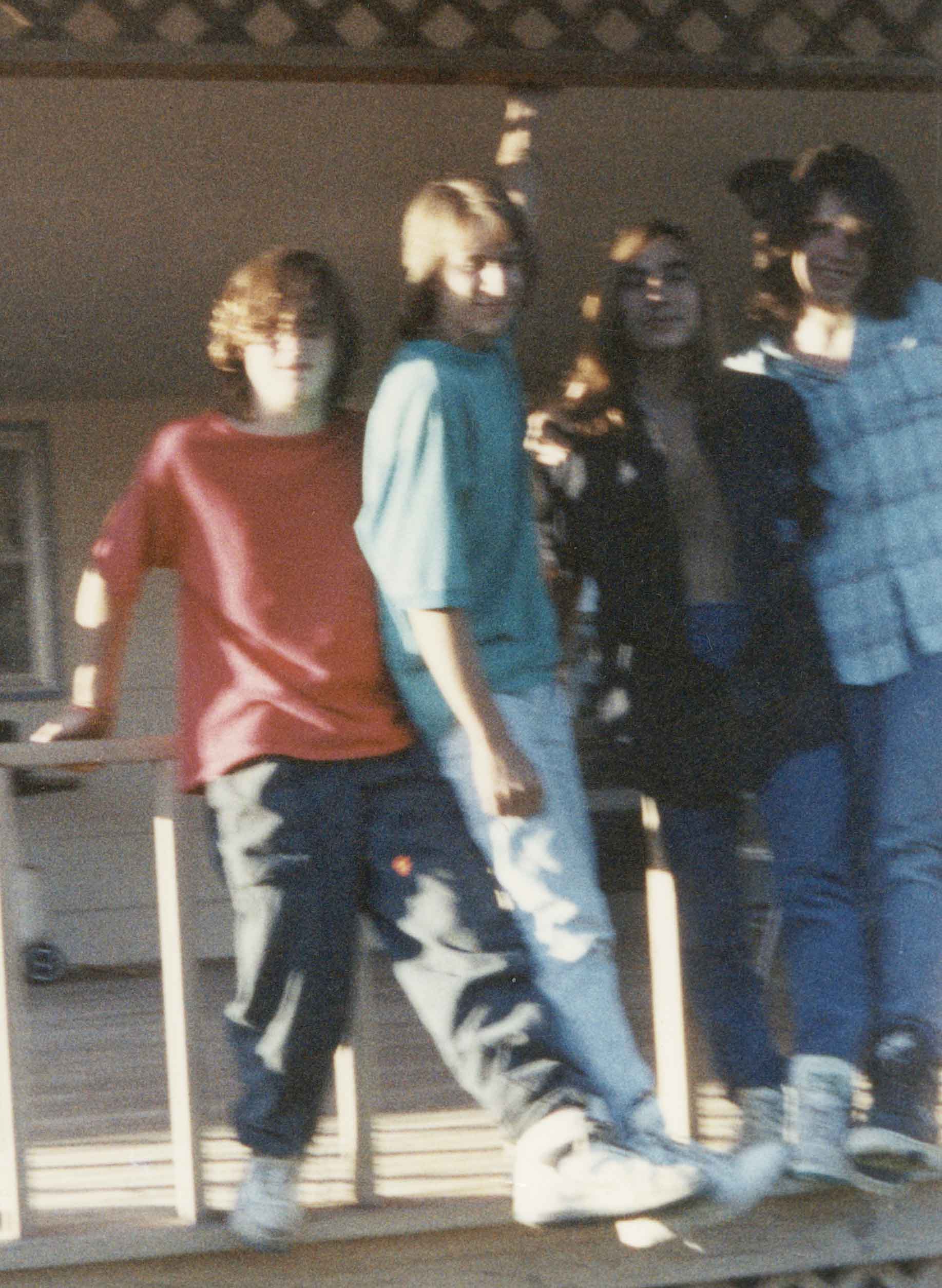 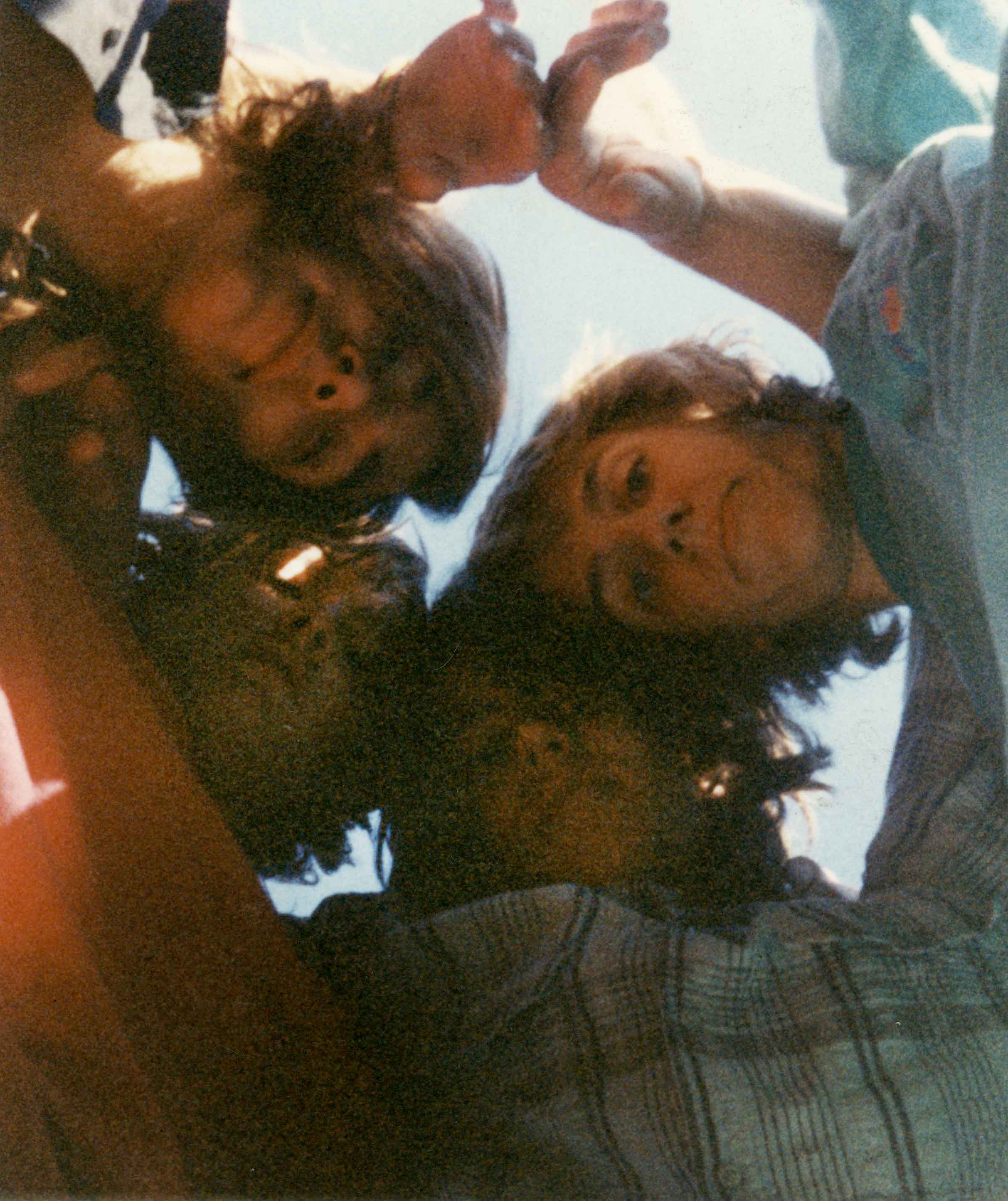 In high school, bands didn’t practice once a week in some rental space like we do now. We practiced every day after school. Instead of athletics, we long-haired kids had rock. Instead of emulating sports heroes, we tried to be like the bands and rockers we admired.

When girls came over, we didn’t get much done. It was just showing off and being cool. It was exhilarating. Rock & roll made me feel great. 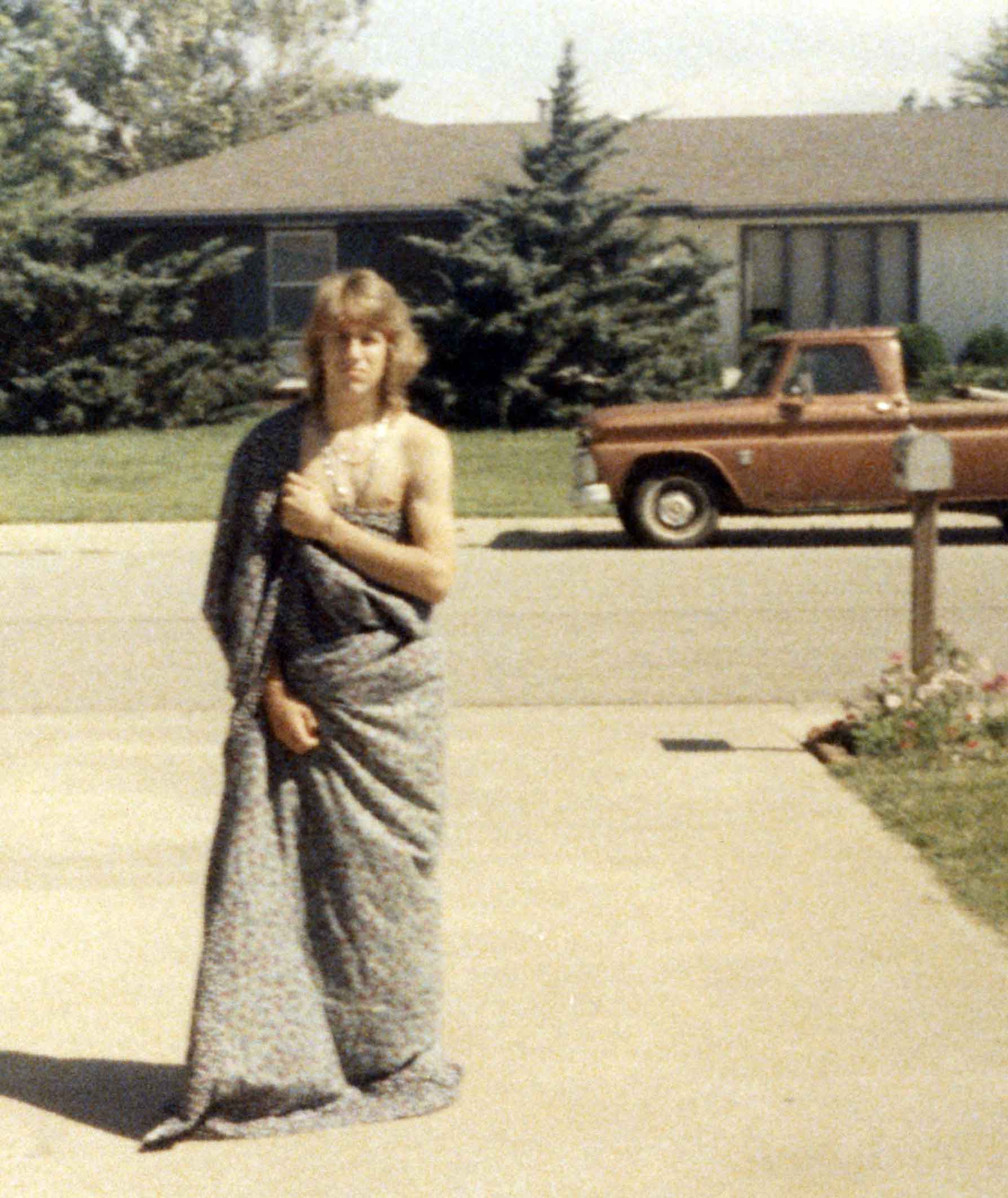 The Backdoor was a coffeehouse on campus run by an old hippy. There was a small stage and Dave and I went there a few times to play open mic nights. We booked a gig with the guy but when we showed up to unload the gear, it was closed.

The next time we talked to him he said he had forgotten and was sorry. That happened at our age. People didn’t take us seriously because we were just teenagers. But we got another date and this time it happened. All our friends and girlfriends were there, and even my brother came with some kids from his summer camp for a few songs. 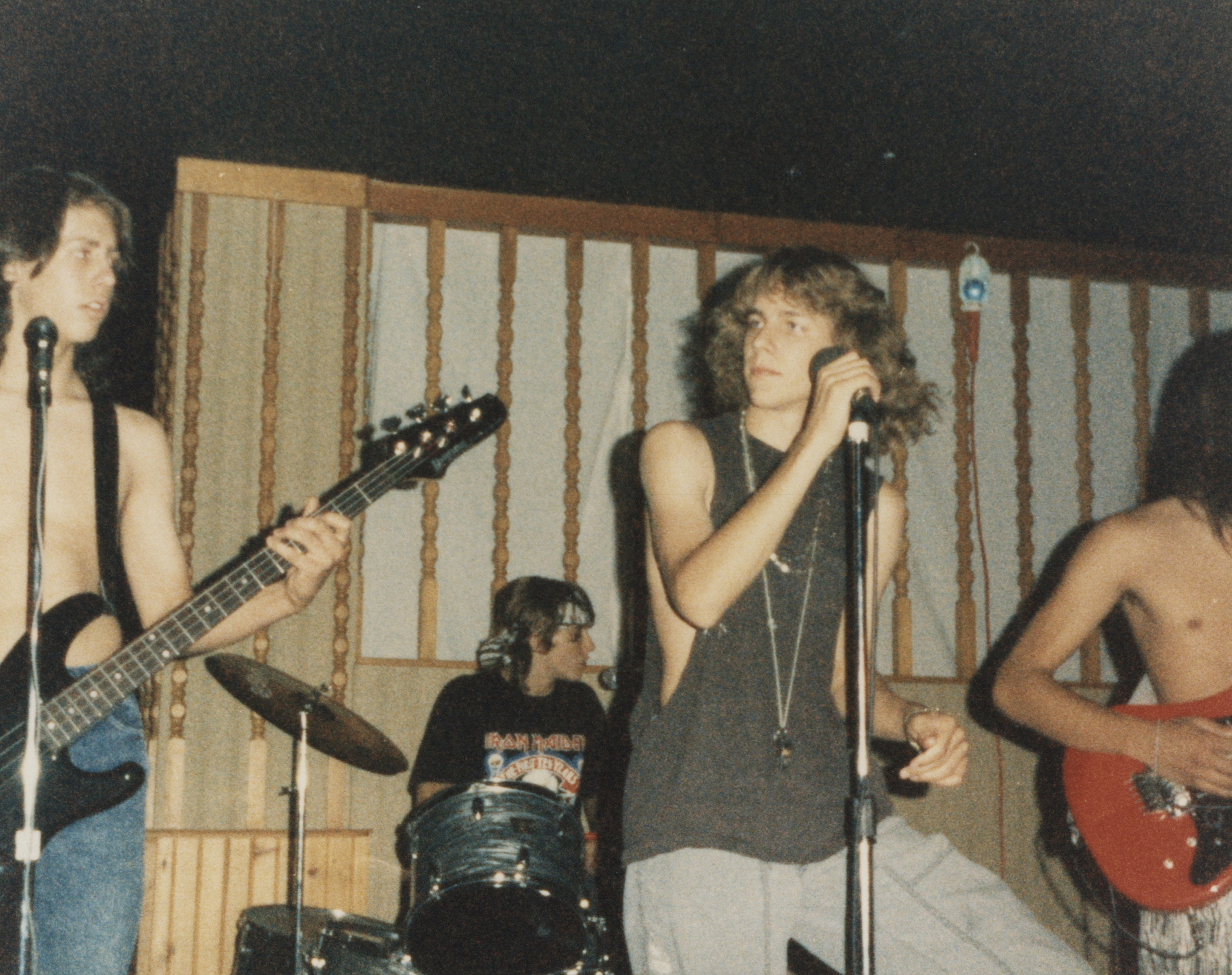 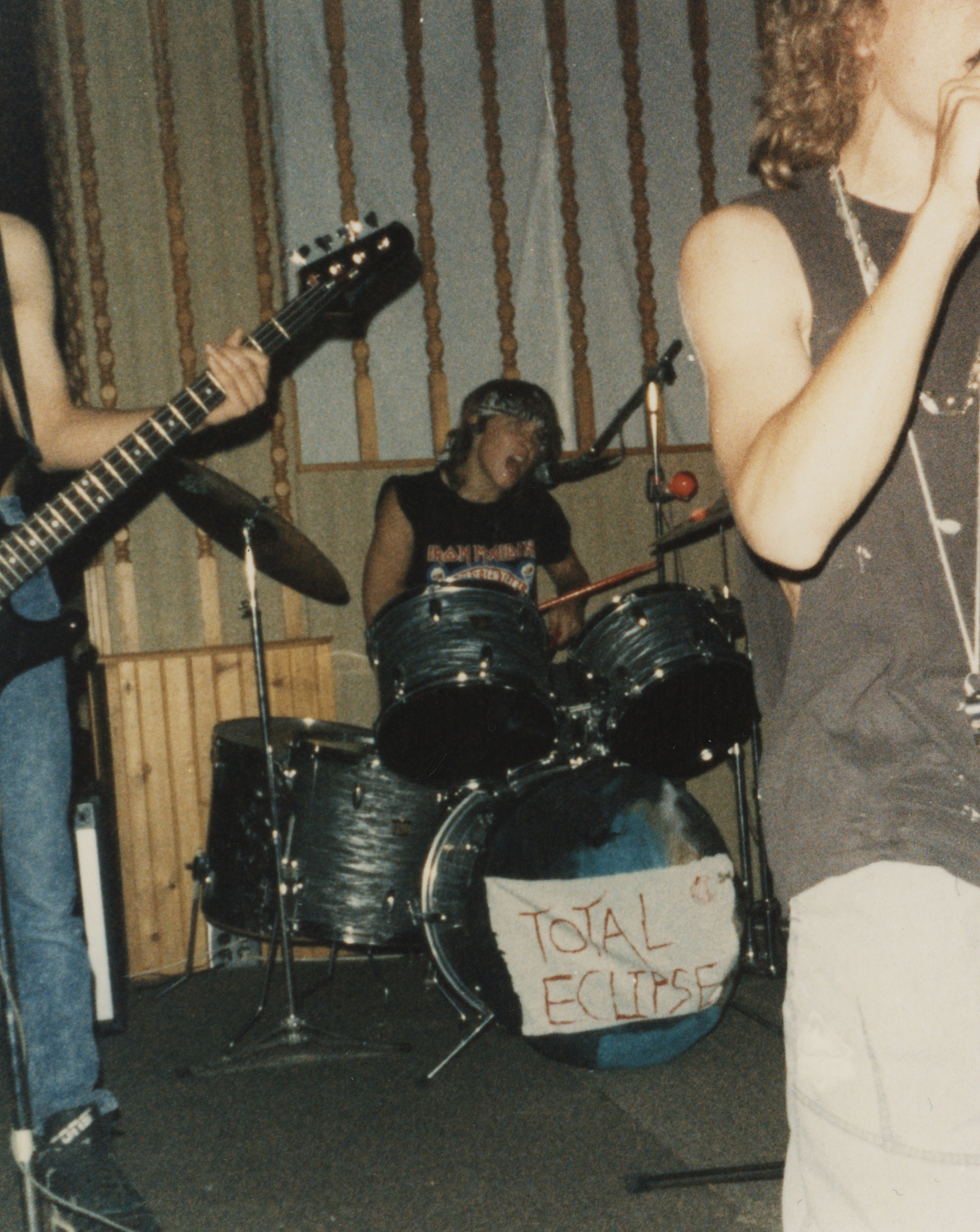 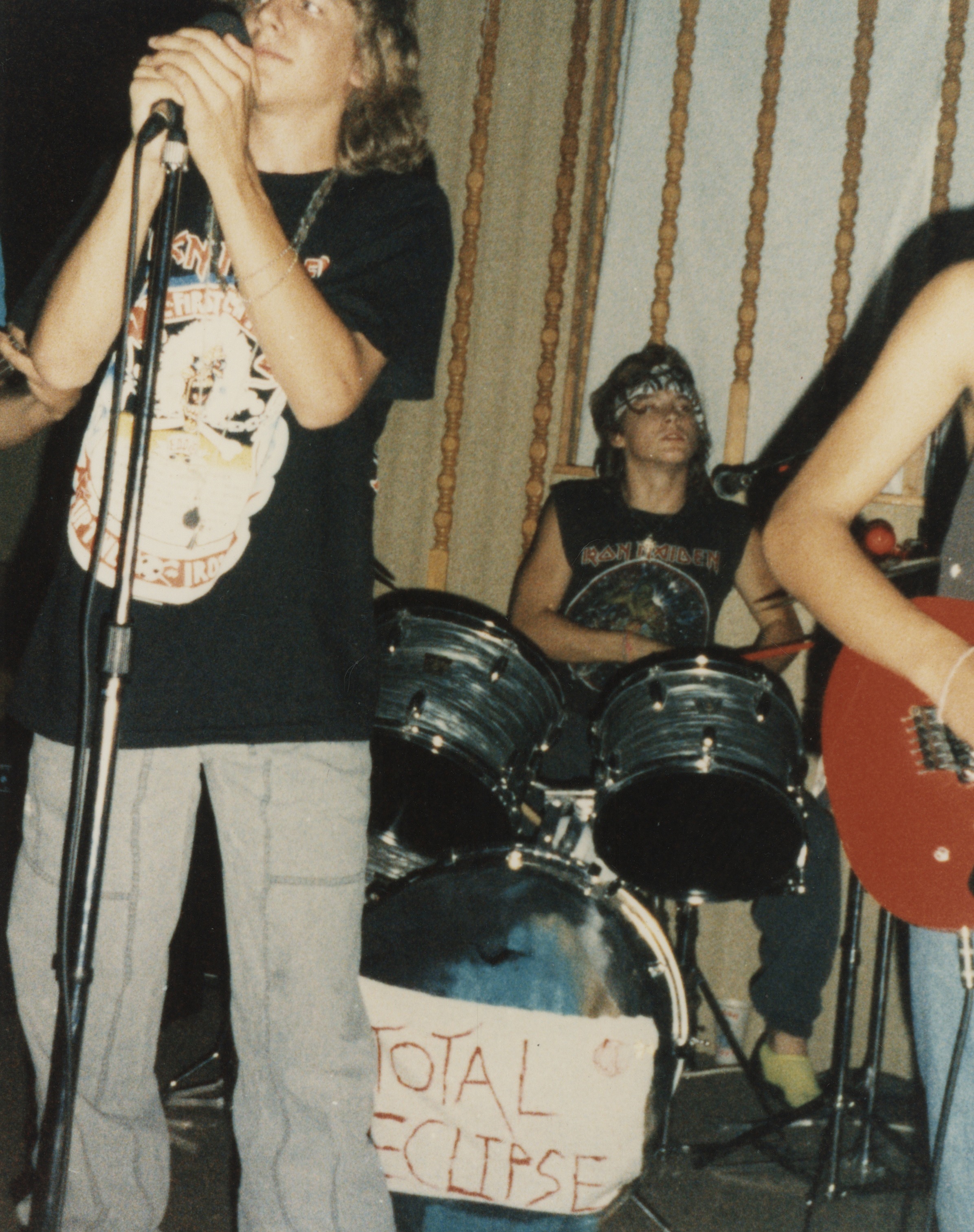 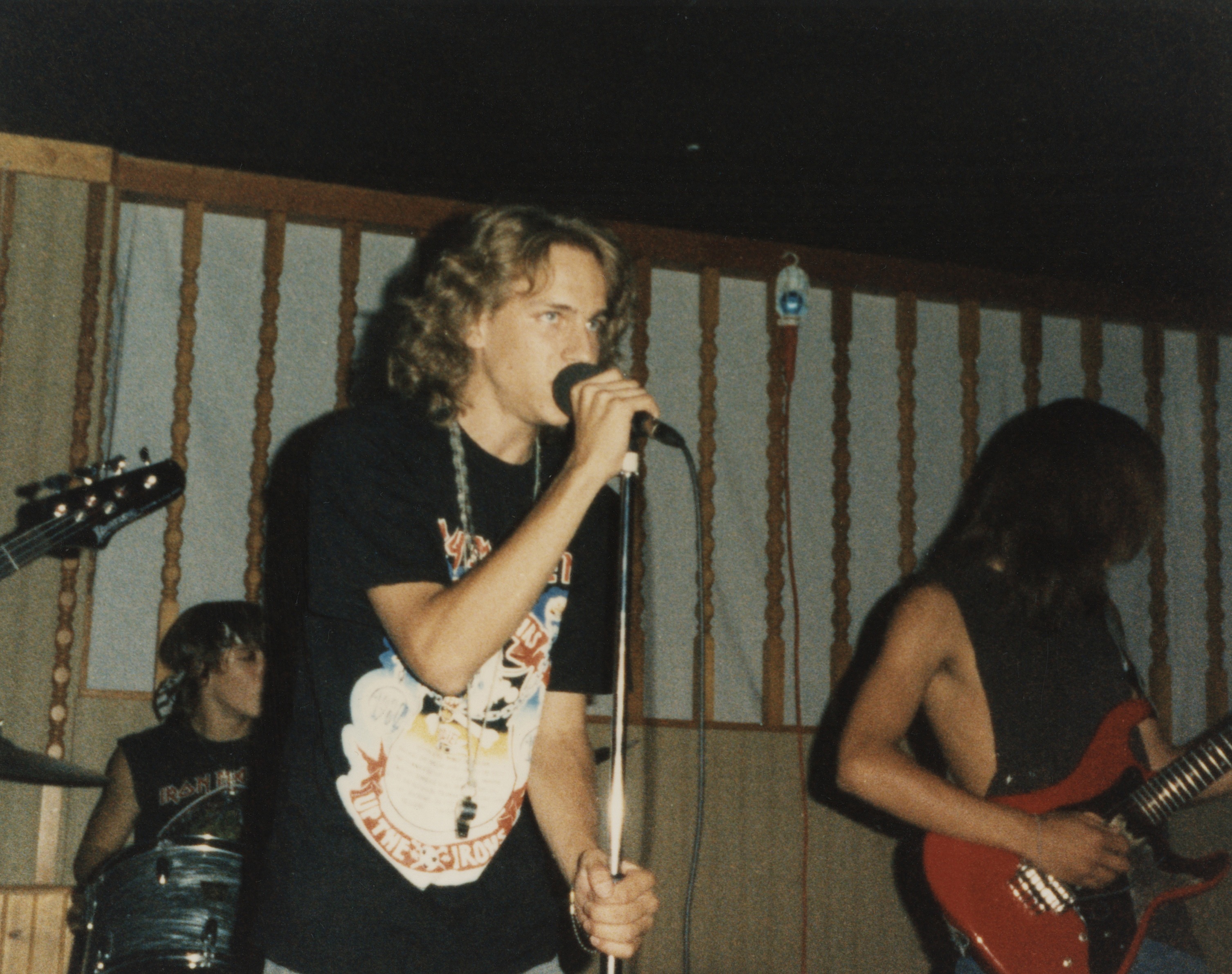 Wise advice from a friend

Chad Arasmith always hung out at practice and he was there on this night too. We joked that he was the manager, but during a break, or maybe after the show, he gave me the kind of advice a good manager would give. He said two things:

You sound like you’re trying to be Axl Rose. You should just be yourself.

I remember it to this day because I was embarrassed. I knew he was right but I had not thought about it previously. I’m pretty sure I told the Welcome to the Jungle story just like I saw it on the famous Live at the Ritz video, as if I were Axl. It would be embarrassing to see a video of that today, even if we know it’s all just part of growing up and finding your own identity.

You should face the crowd.

He was right again. Before this gig we had played informally, setting up outdoors near the cleaners where Jason’s dad worked, but this was our first real show on a stage in front of a crowd. While I was singing I was turning around and facing Tommy and the other guys, because that’s what we did in practice.

For every show I've ever done in my life since that night, I've always remembered to look at the audience. Other people would later call it owning the stage. 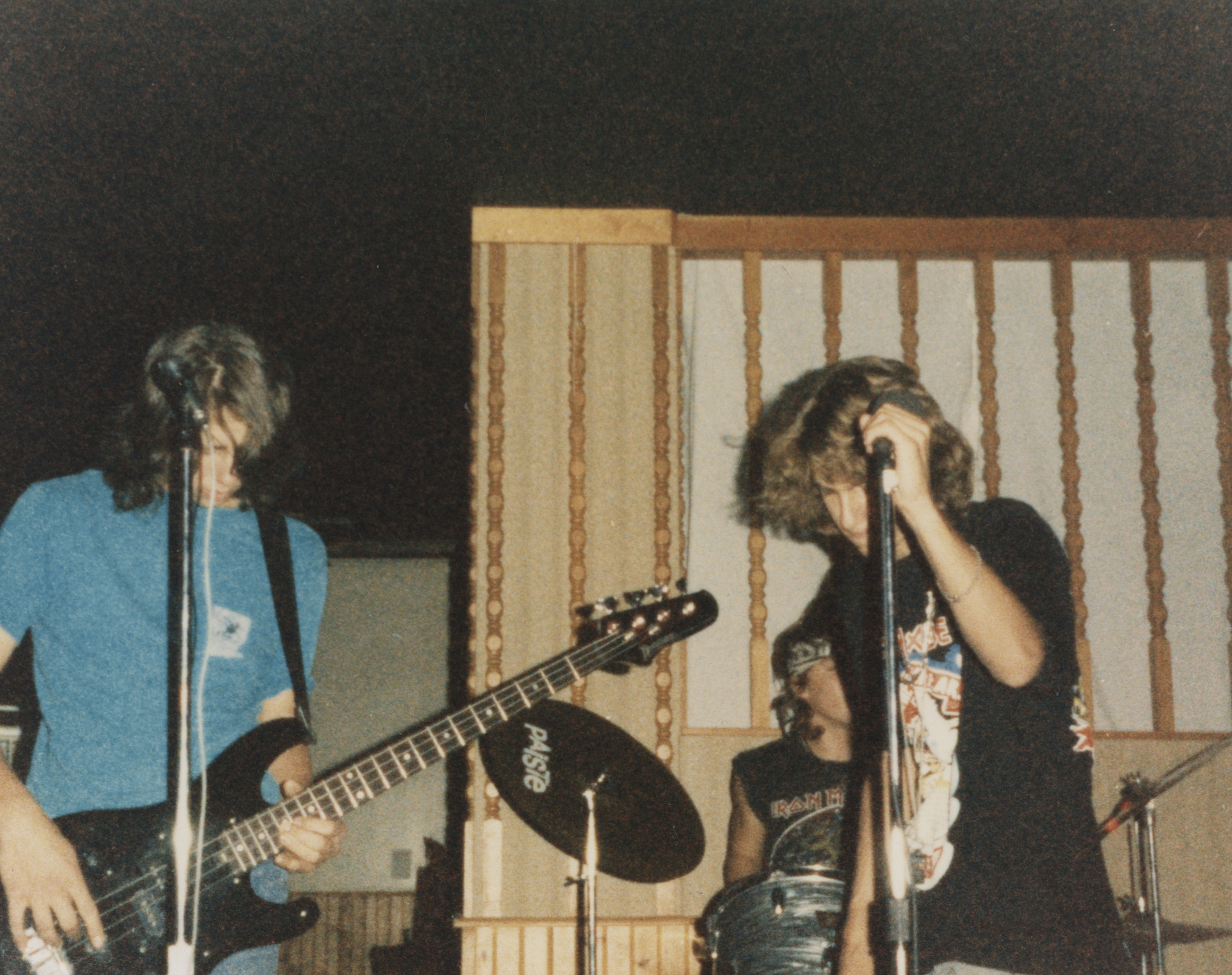 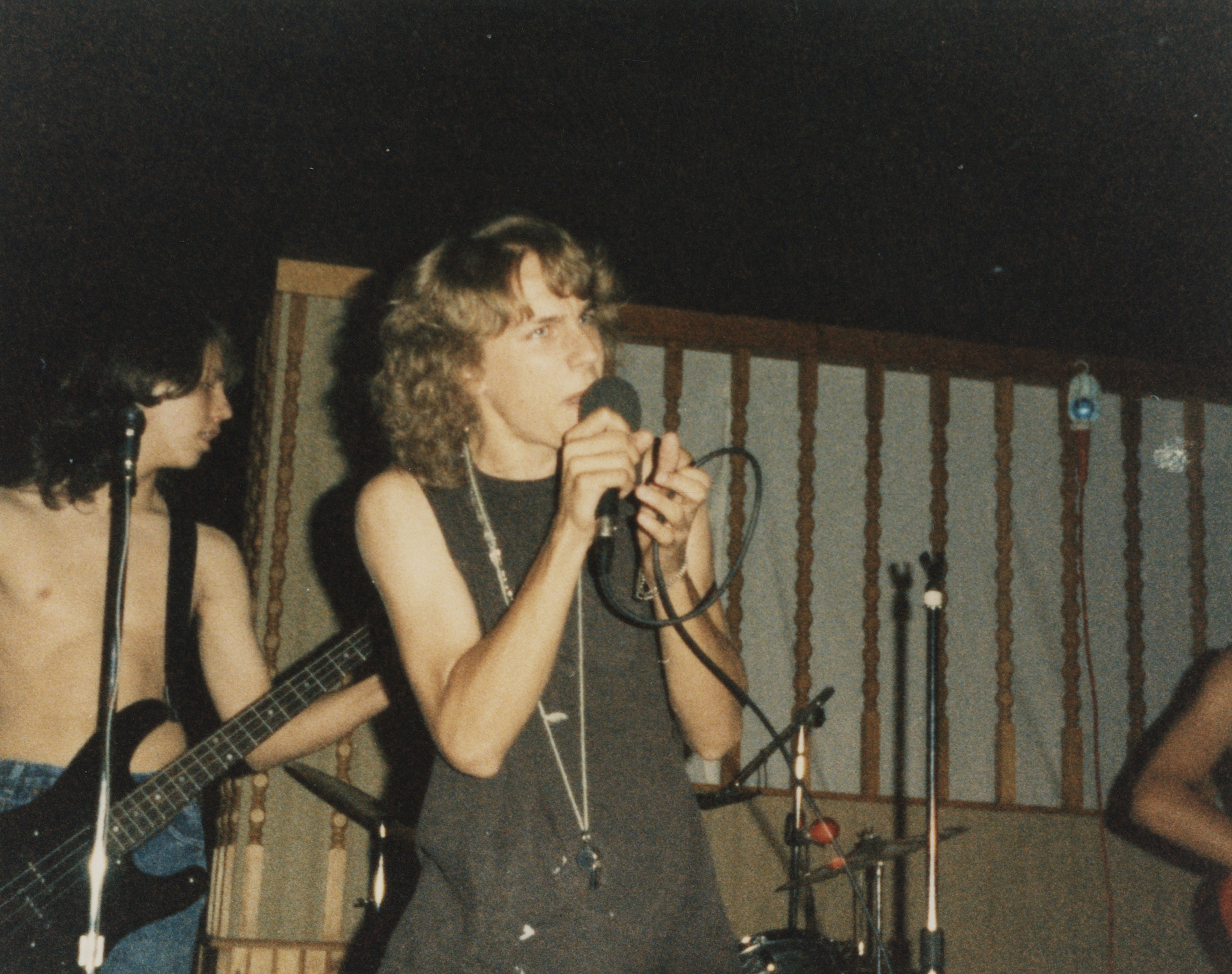 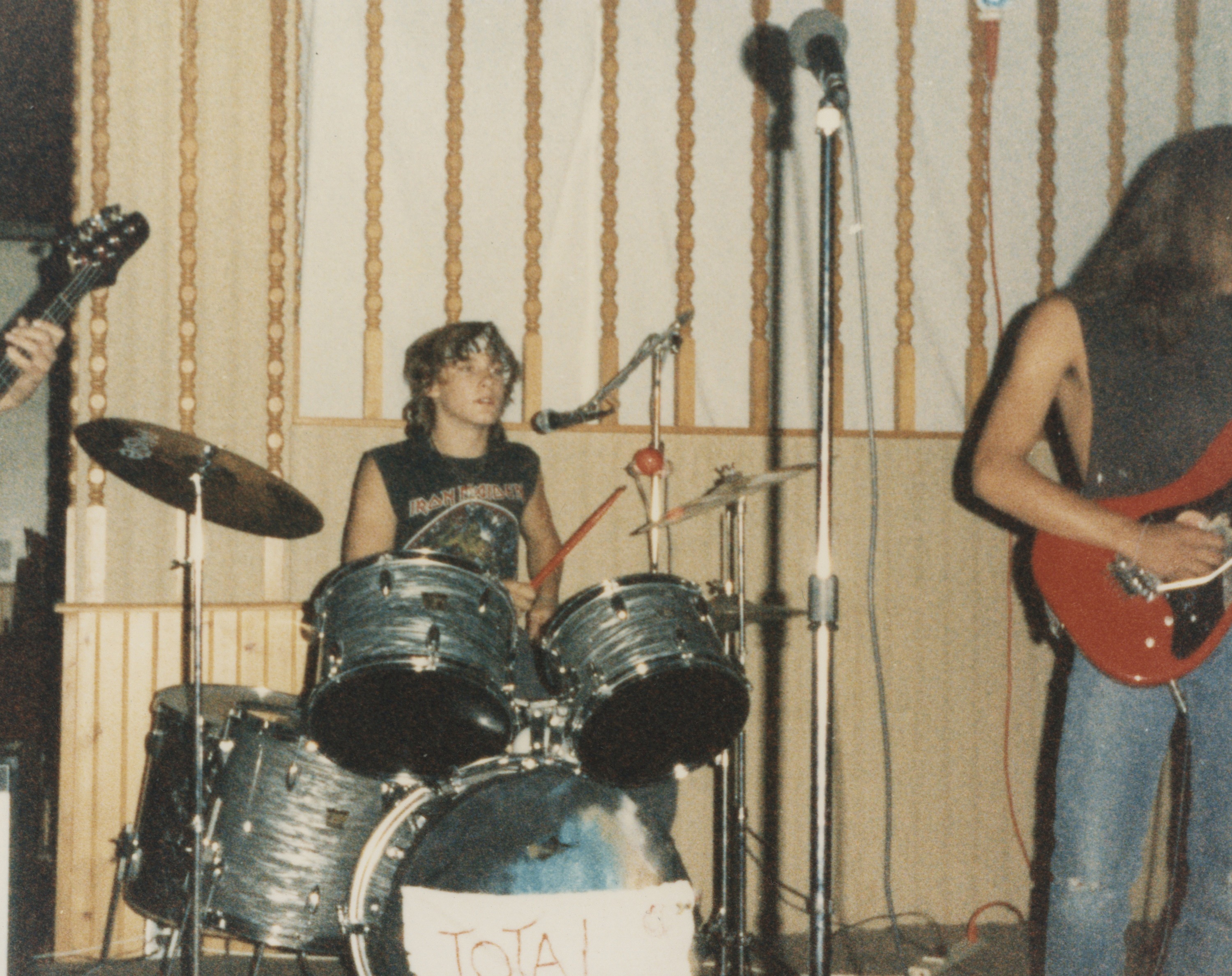 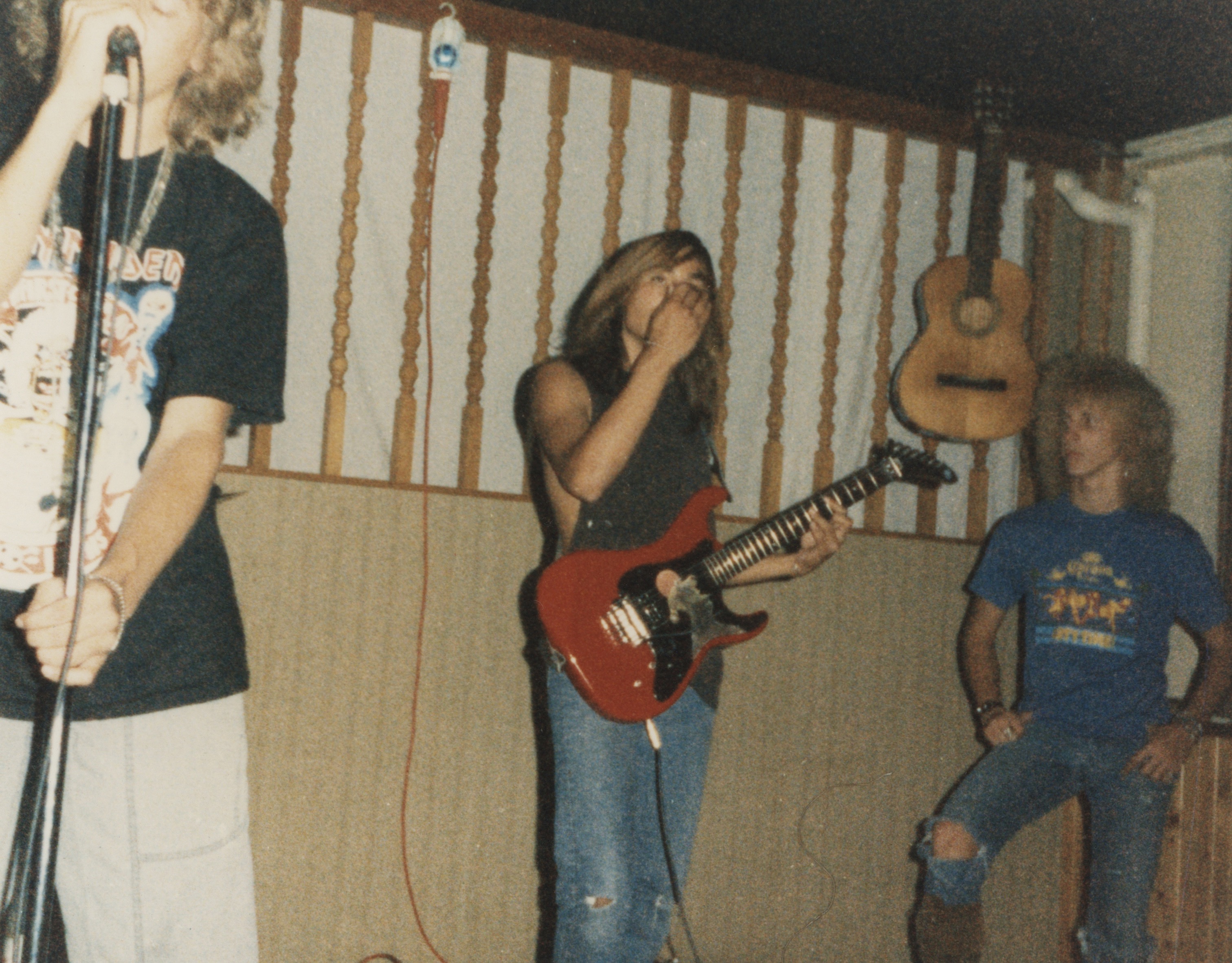 I think that’s Bruce Weiss on the right. He had leather boots with tassels, not just that night, but walking down the hallway at school. We partied at his apartment a few times. We all lived at home, but it was like this guy didn’t have parents. Ever. 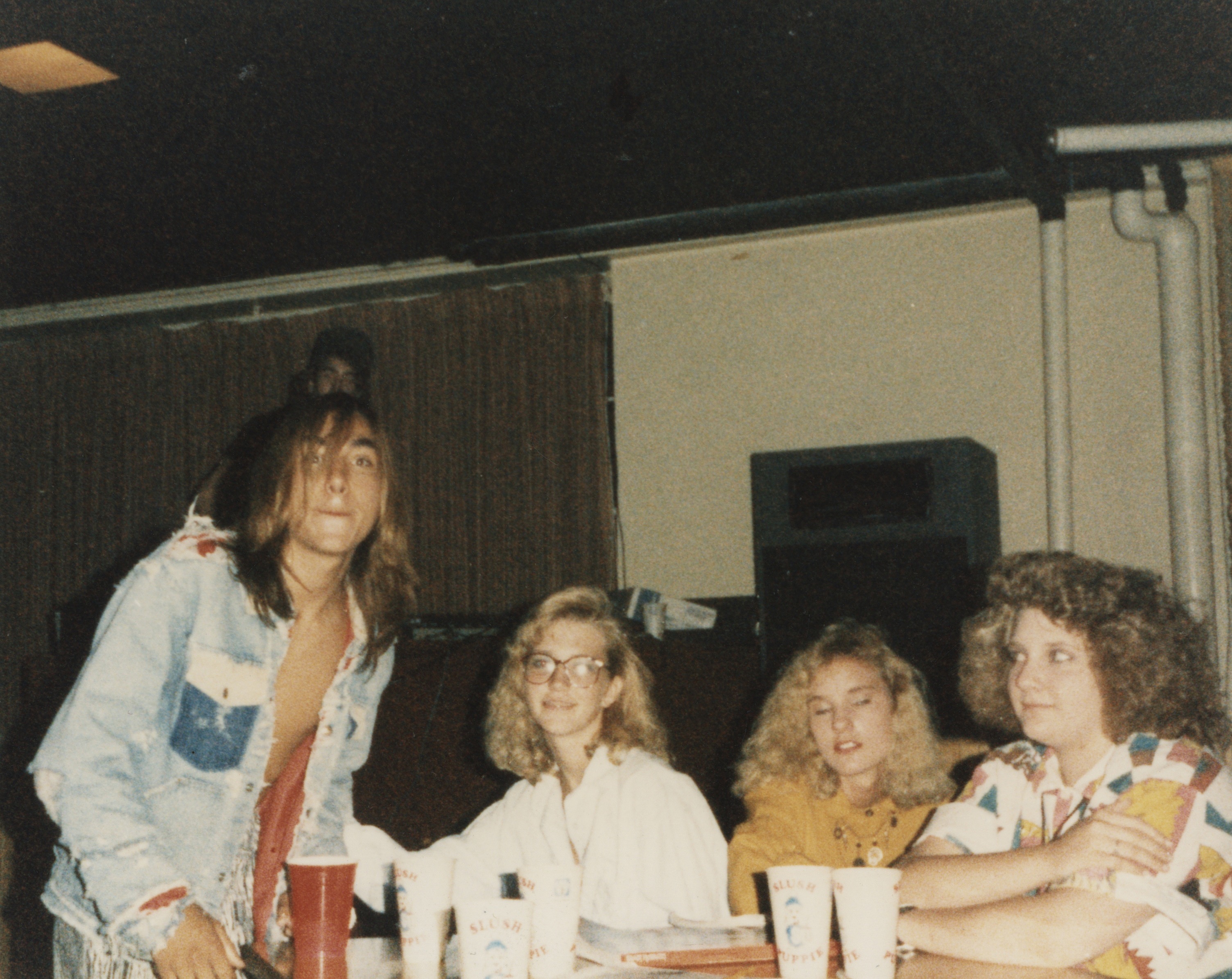 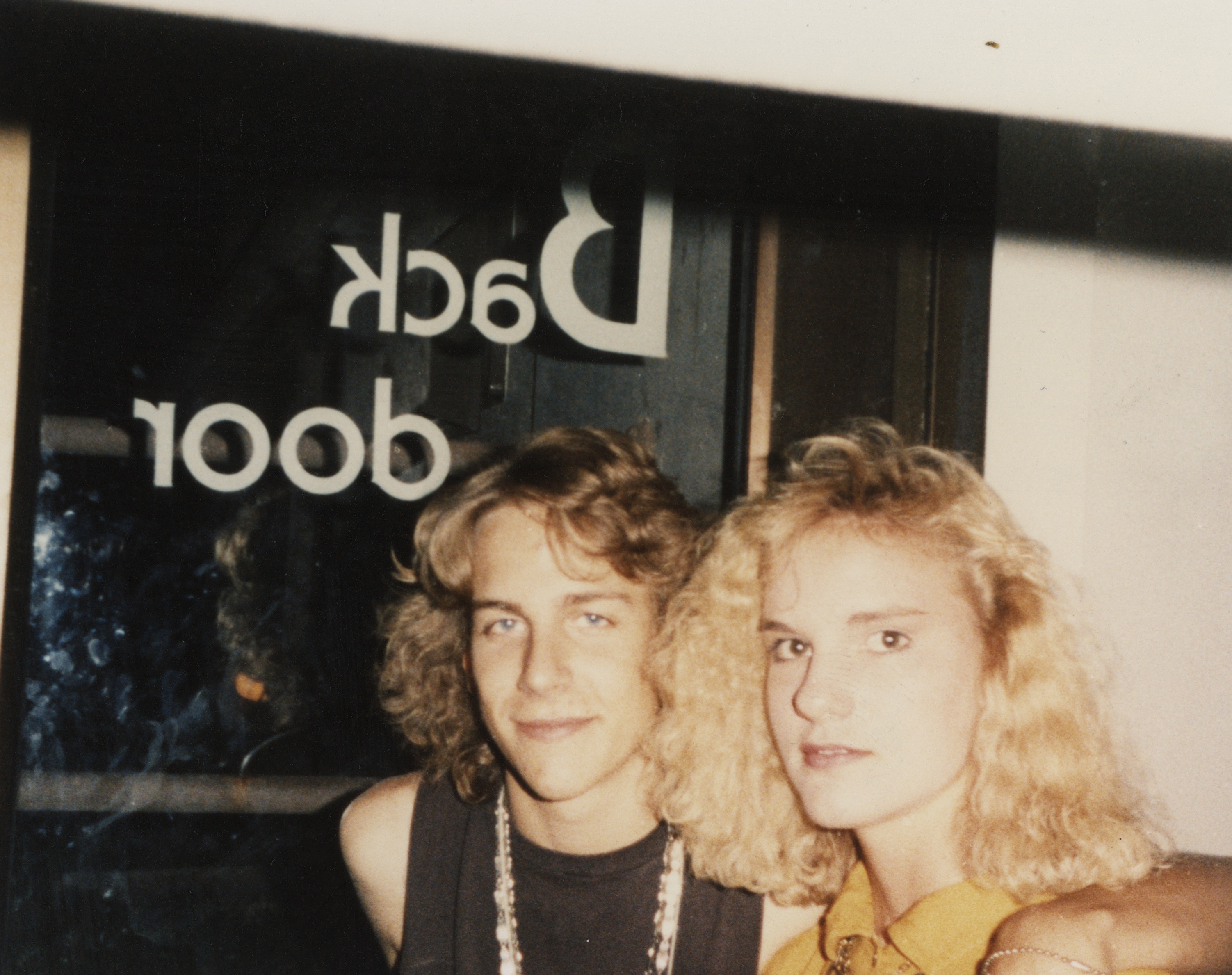 Justin and Andrea Nyhoff after the Backdoor gig.

This show almost got cancelled because Dave crashed Jason’s car in front of the place, and elsewhere my car ran out of gas. The show went on but I don’t remember much except that we didn’t have a stage. We just played on the same level as the tables and people in the bar. I also remember we played Show No Mercy from L.A. Guns, and Unskinny Bop from Poison. There aren’t any photos.

Tom’s uncle Skip and aunt Nancy had just started a country band called Sly Ridge and we got to practice in their jam space. They had a soundboard hooked up to record on cassette. This was the first time we had any kind of recording better than a boom box in a practice space.

Listening now, we weren’t good at all, but we thought we were at the time. I thought I was great, but I was clearly over singing, and hadn’t yet found my own voice. The music was all over the place, but Tom was pretty solid and I followed him.

Even though it just sounds like teenagers making noise, I like to hear the band unfolding. In life we first emulate until we learn what works, and eventually we find our way. I’m glad the adults let us have this space to experiment and grow into it. If they had told us we were really bad, we might have lost confidence and given up. It must be like a watching a young kid struggle at sports. 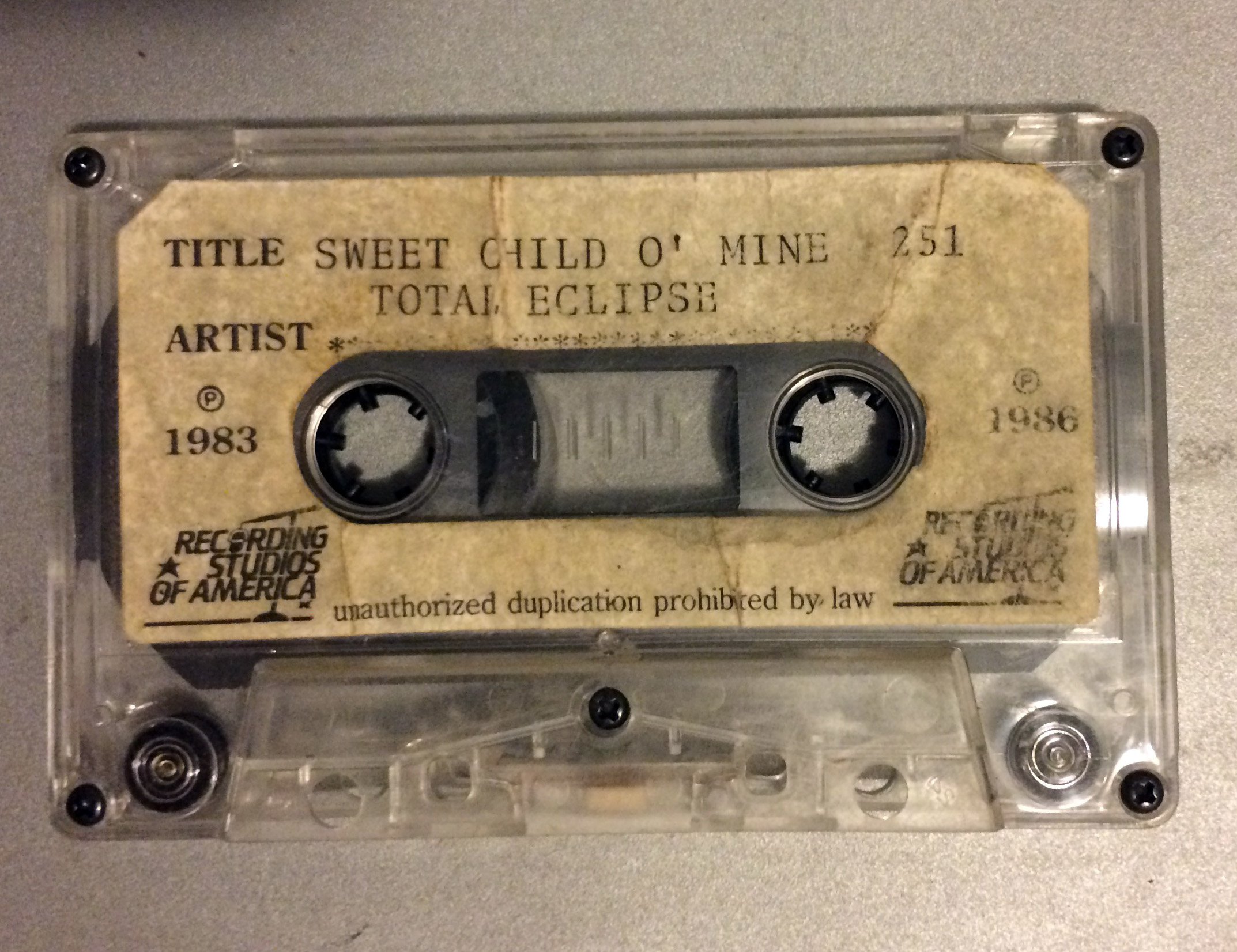 World’s of Fun recording of Sweet Child O’ Mine

The paper organized a trip to Worlds of Fun, an amusement park in Kansas City. There was a studio there that allowed you to record yourself singing to Karaoke versions of popular songs.

I sang Sweet Child O’ Mine and had them label the cassette Total Eclipse. I thought I sang great at the time. Matt Grove and his father were on the trip, and I let them hear it on the car stereo in the parking lot. I was proud. But I can barely listen to it now. It sounds so off-key that I tried to use pitch correction on it to fix it somewhat before posting it to the archives.

Jason made up a riff when we were practicing in his dad’s shed in the backyard. I improvised lyrics. Really cheesy lyrics. At the time, all the 80s glam bands were singing about girls and partying, and I was emulating that. I remember we were excited because it sounded like a song from another band, but we had just made it up.

This song would have been forgotten except for the fact that there are two recordings of it. I cringe listening to the lyrics now, but it shows how we weren’t sure we could even write a song. At 15, we were still very much in the stage of imitation, and composing as a group was a foreign idea. It was hard to get everyone to be quiet long enough to tune guitars, let alone explain ideas for an original song.

I was shy and embarrassed by almost everything before being in a rock band. I wouldn’t have tried to write a song before that, much less one with lyrics about girls and love. This cheesy song was created by that youthful energy. And the original songs got technically better and more interesting lyrically very soon after that when I started writing songs with Dave.

This is the first song I composed lyrics to, as opposed to making them up on the spot. Dave and I started playing acoustic guitar and singing, and Freedom is still a good song. I don’t think there is a recording but I remember how it went. 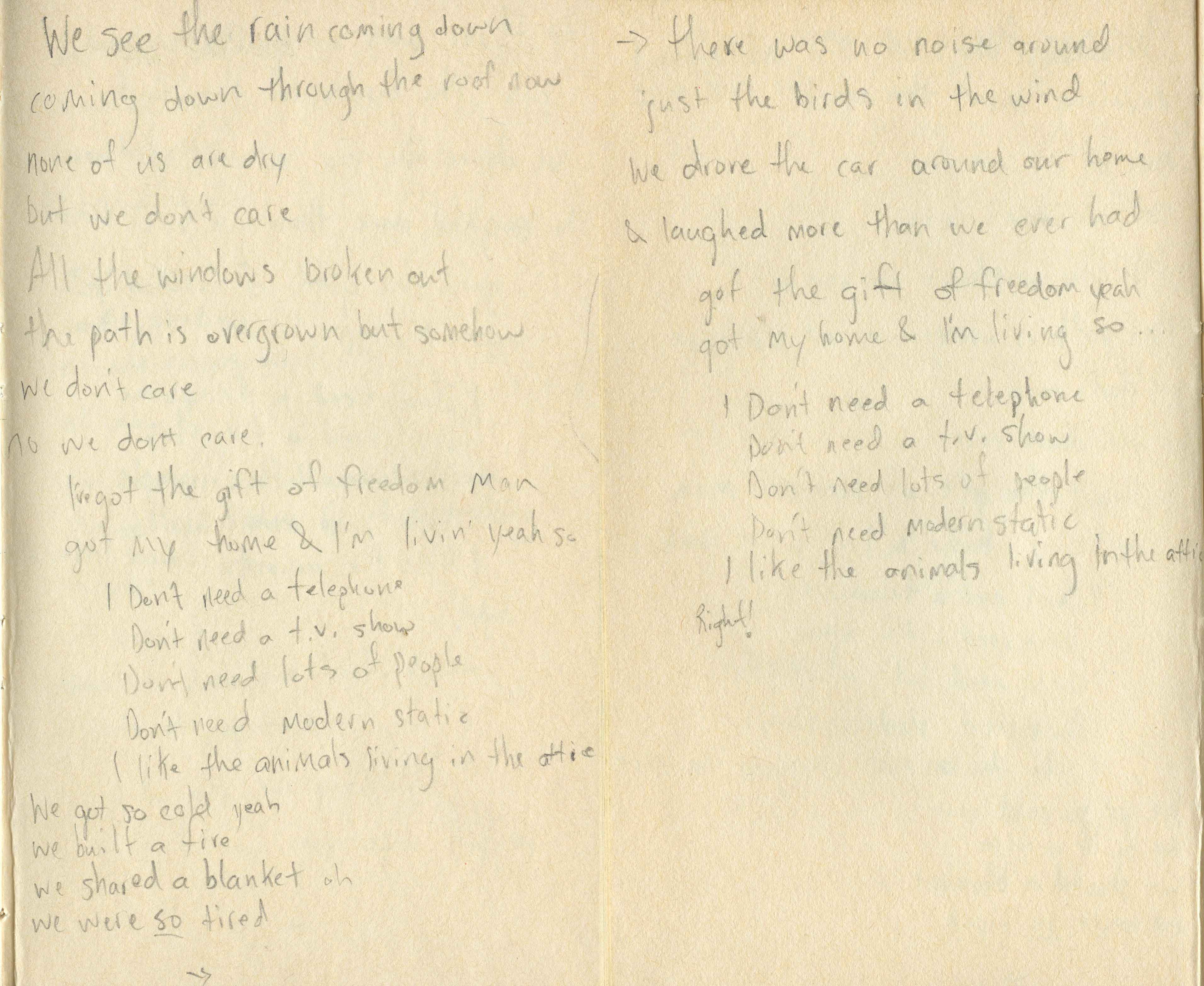 Freedom by Justin Stahlman and Dave Spalsbury in 1990

When the Black Crowes came out with Shake Your Money Maker and the hits Twice As Hard and the cover of Hard to Handle, there was a shift from hard rock like GNR to bluesier styles. Bands like L.A. Guns and Cinderella turned down the distortion and came out with more laid-back albums.

Around this time Nathan Meckel joined the band as a second guitarist. We did a few Black Crowes songs, and I didn’t really like what I felt (at the time) was wimpy, laid-back rock. We practiced next door to his father’s recording studio. It didn’t last for long. I don’t remember exactly why, but Total Eclipse broke up and moved the gear out of the practice space one afternoon.

Luckily, a high school photographer stopped by and captured one of our last practices in that jam space. I found the negatives in 2015 and got them scanned in. 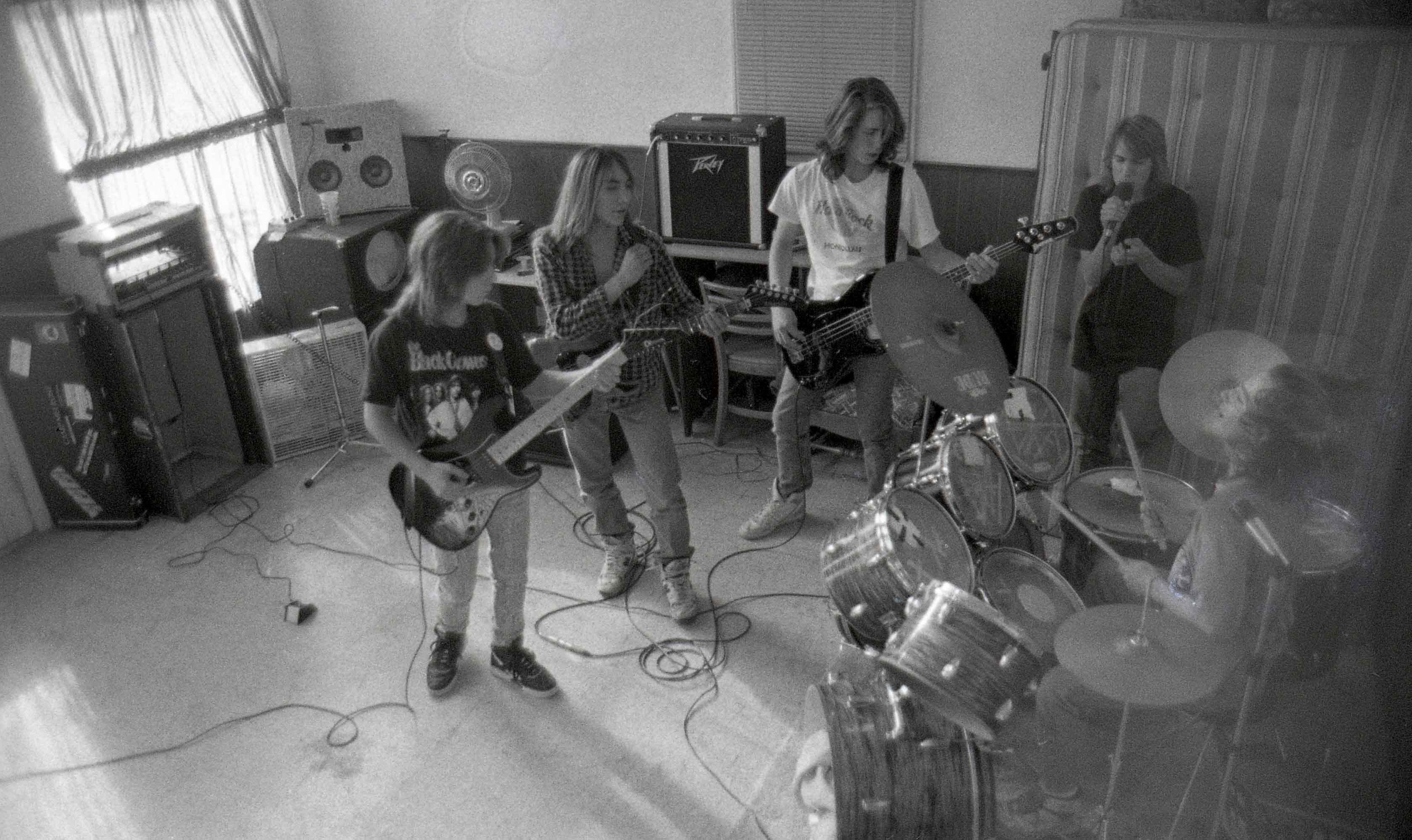 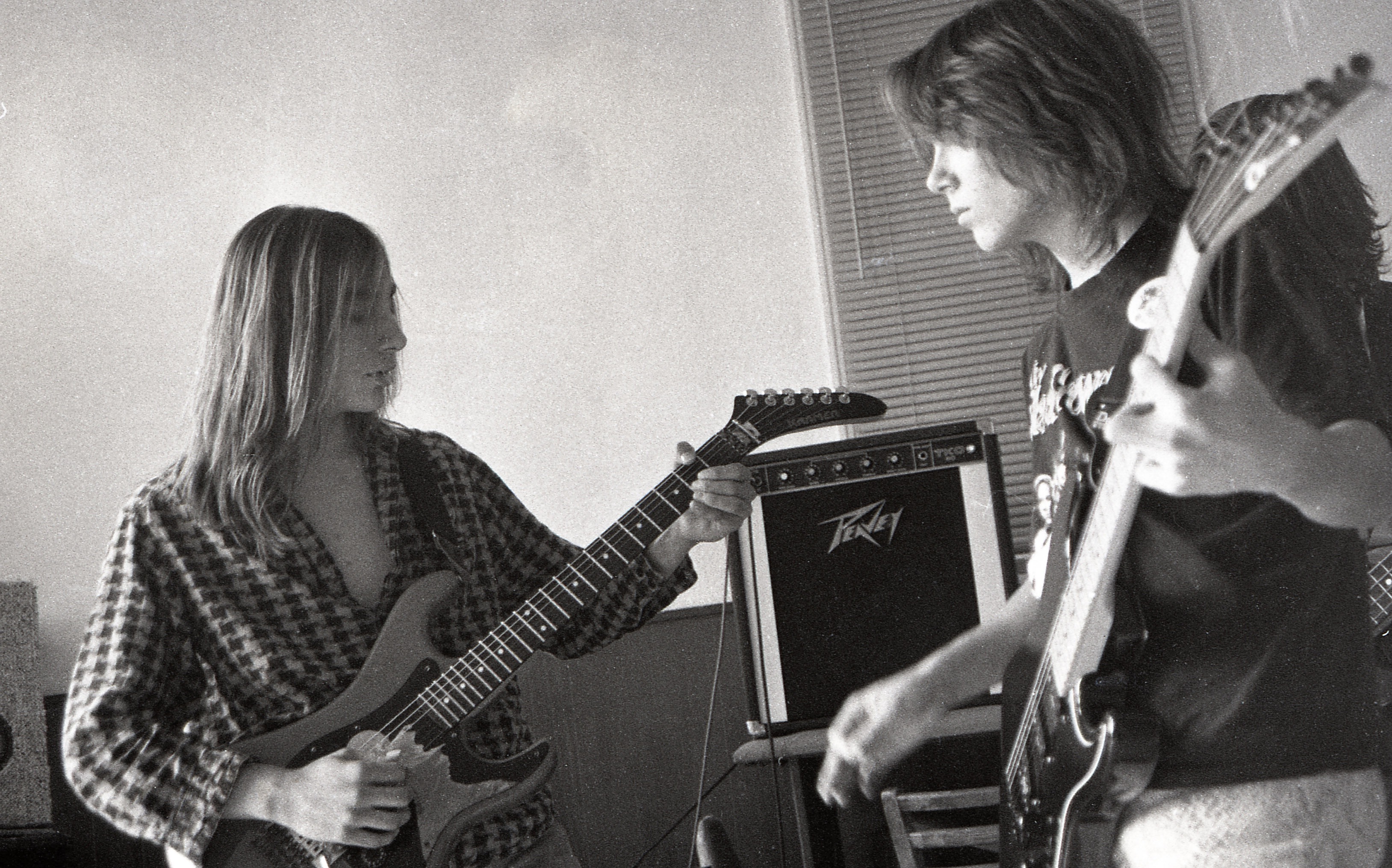 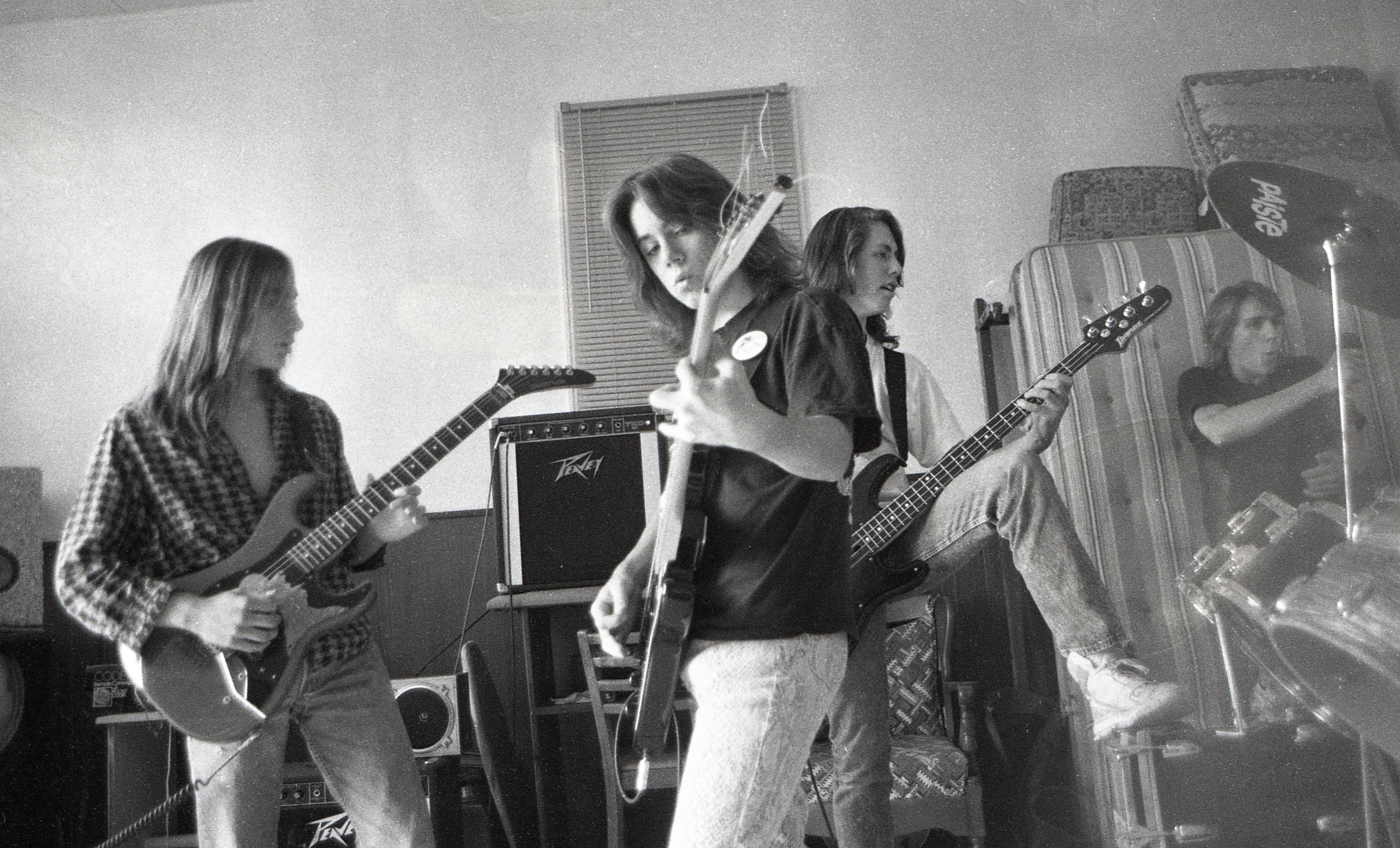 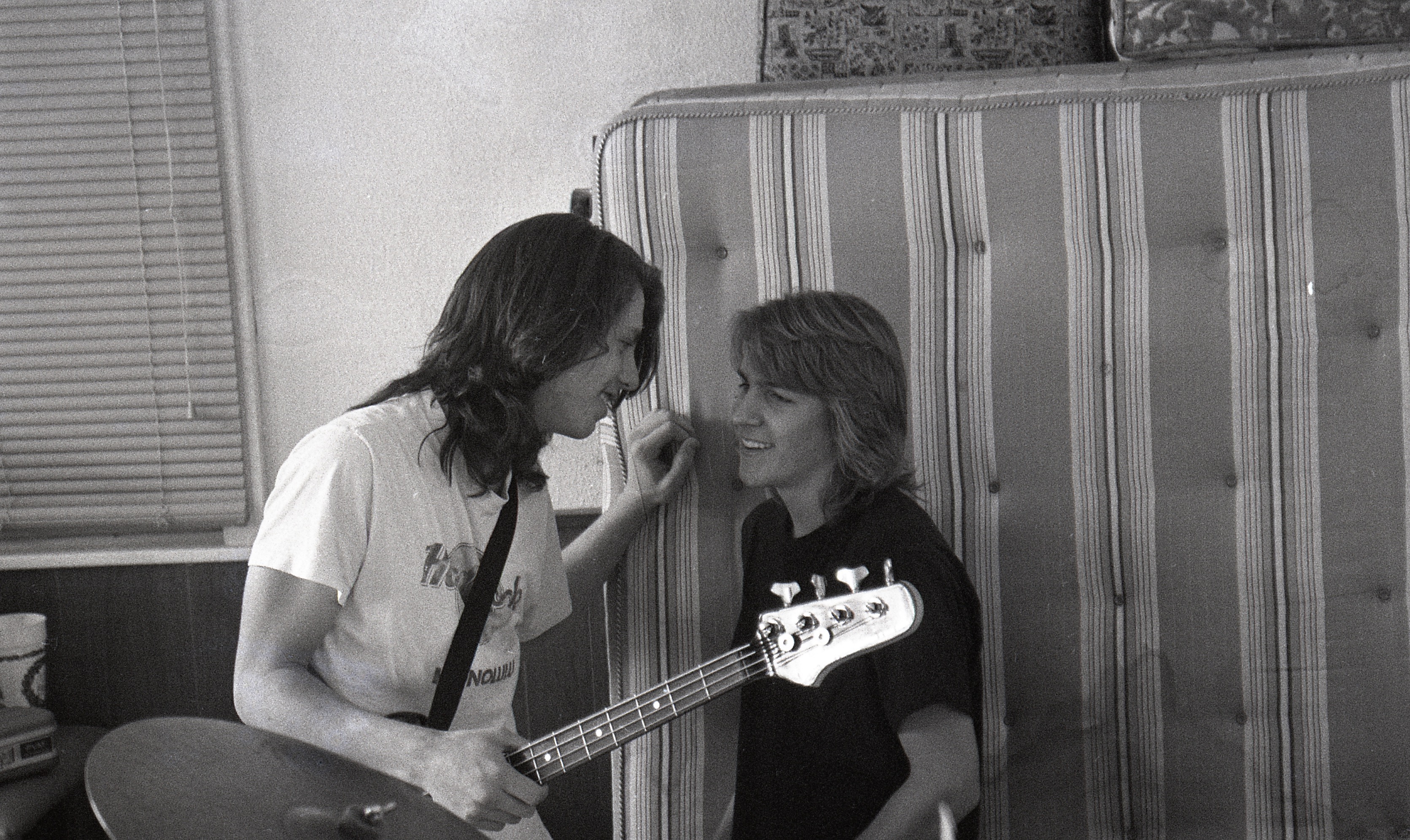 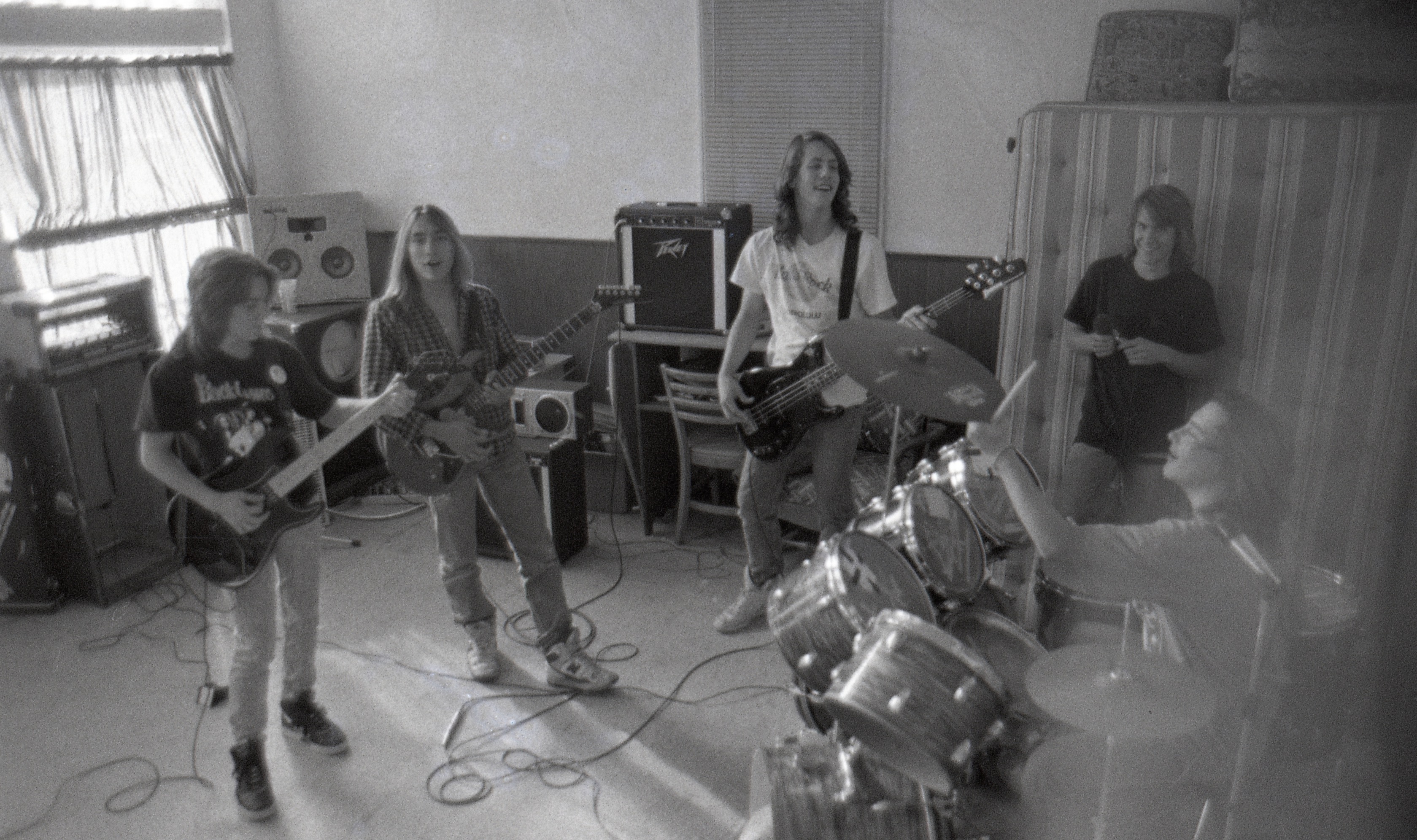 After moving out of Nathan’s jam space, the band was over. Tom joined Last Lyck and Dave and I started to write original songs and do two-man acoustic open mic nights at The Backdoor. Dave taught me how to play some guitar chords so we could do Patience and Civil War from Guns N’ Roses. We soon regrouped with Tom and new guitarist Wade Van Eaton from Oakley and started Joshua’s 12.

A real house made miniature