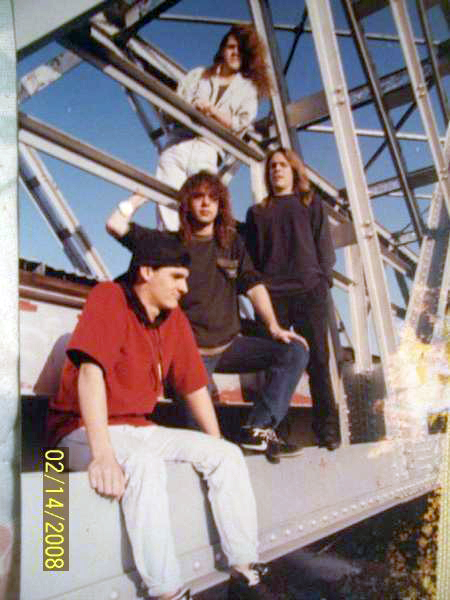 Sly Buddah was a rock cover band in the early 1990s in Hays, KS. Justin Hanson, Schon Thacker, Scott Hubbell and Justin Stahlman. Some of the members went on to form Nightone Drama, Black Orchid and many other bands.

Sly Buddah. Scott knew the correct spelling was Buddha, but he made it different for the band. The sign at the Fireside Lounge gig spelled it Sly Buda. These photos were taken by Randy Evans in 1991 in order to create a press kit for the band. He was paid $25. Scott Webb was also paid as a "roadie" hauling the gear to Kearney, Neb. with his pickup. He also helped set up and was general moral support.

I remember this distinctly, there was a pic of us on the tracks and the train coming up behind us. We got off about 20 seconds beforehand. That is when the engineer flipped us off. Damn it, there was a pic! I looked through everything I have and can not find it. — Scott in 2016 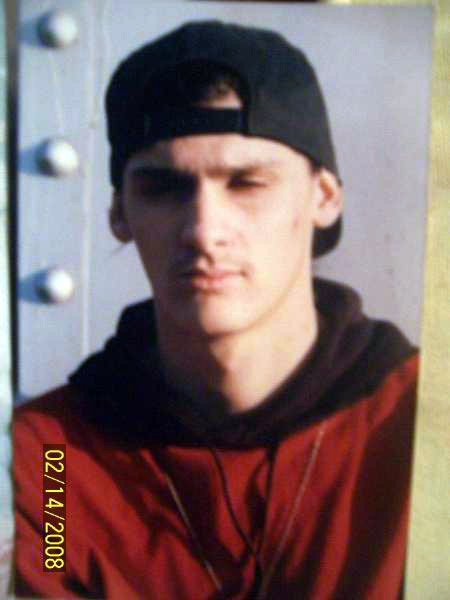 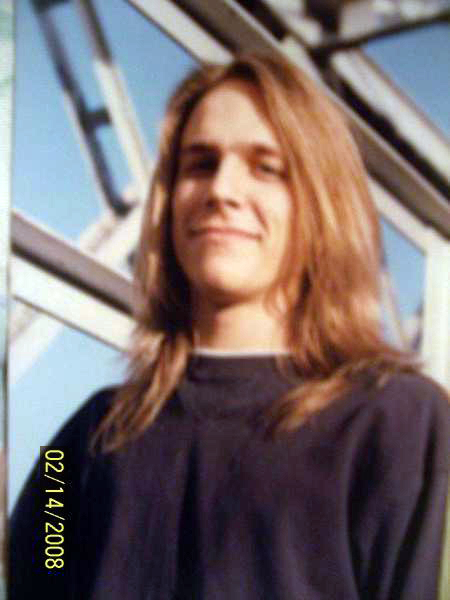 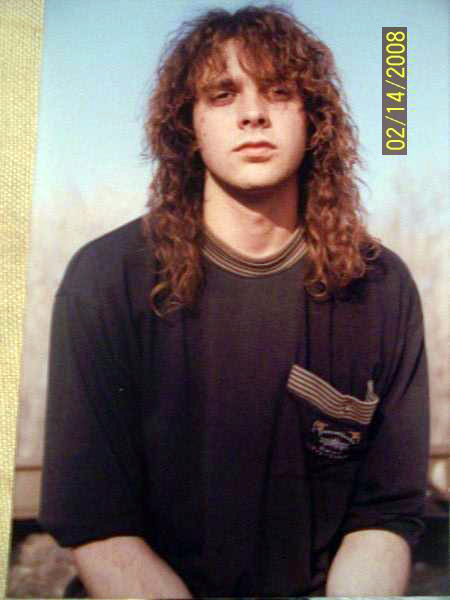 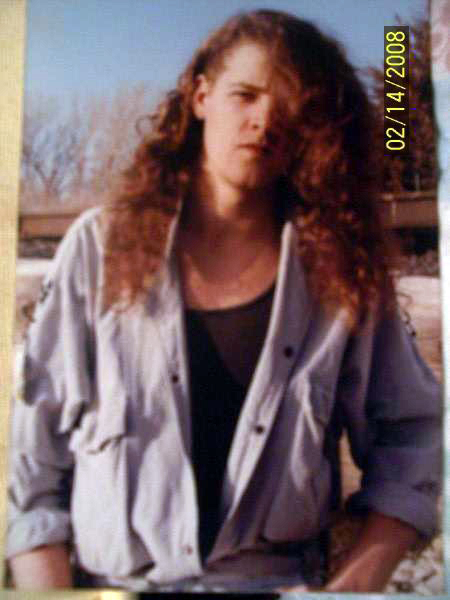 I was in Sly Buddah from late summer 1991 until March 1992. The band existed as a trio before me. When I joined we were practicing in a house in Ellis owned by Justin Hanson’s grandma.

The band ended after the equipment was stolen from Scott Hubbell’s truck parked overnight in Hays, KS. We had just gotten back from our gig in Russell, KS — and it was late and everyone was tired, so we left the gear in the truck overnight.

Sly Buddah was already a cover band doing a mix of classic and modern rock when I joined. Scott told me in 2016 that he met me though Joshua’s 12, probably Wade or Heath Van Eaton who lived out in western Kansas and went to school in Oakley. Scott was from Colby or around there. 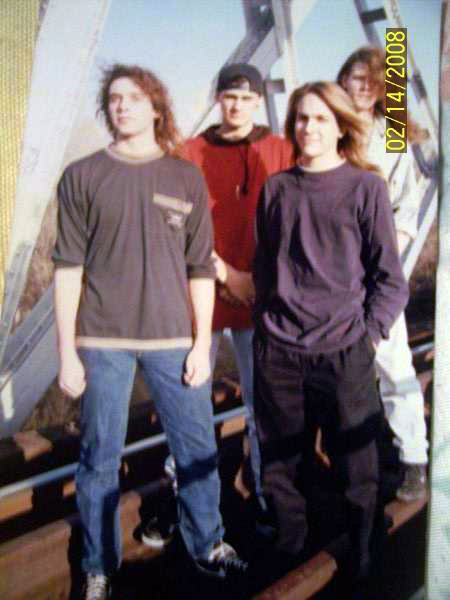 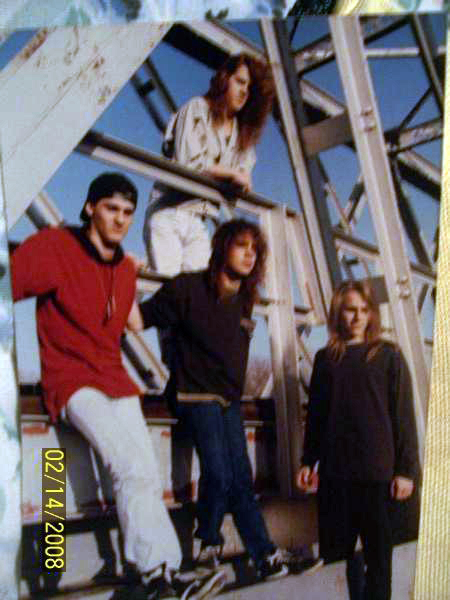 Take this for what it is worth:

Buddah as I remember it.

Schon and I met in Midwest music. Pretty sure he was a senior in HS at the time. We talked and kept in touch. I went back West to farm for the summer and when I moved back to Hays Schon had graduated. I drove to Russell to see if we would click and he had this drummer friend who he said was awesome.

Well....we both know how drummers are (dramatic pause) so I was skeptical. I was introduced to Justin. They were in this warehouse, the tiniest room of the place of course. We proceeded to jam. WOW! Justin was awesome. Schon was awesome. And they could both sing. Sly Buddah was born. I do not recall how many trio gigs we did, but we soon found out that our jam approach to covers and playing in general did not work well with our setting.

We auditioned at least 3 singers. One was your age or a bit younger maybe? He also played guitar. Bonus! I remember doing "Crazy Train", he could play and had a cool voice. OMG!!! The kid had no concept of time. It was an absolute train wreck. Next!

This guy, believe it or not, was actually older than me. He had the chops for sure, and the experience. He thought the rest of you all were too young so he declined. Dickhead! He saw us play in Hays after his audition and wanted to be in. We told him to fuck off.

Now this is where it gets sketchy, I know I heard your name from someone, as you say, probably one of the Van Eatons as I was good friends with both of them. I always wanted to play with Wade and of course his brother Heath was my competition. Anyway, I remember having you come to the house in Ellis (Justin’s grandma own’d it), and having you try out. ( I later rented it when I went back to finish college) Sure do not remember what we played, I just remember the click! No offense my friend, but you were flat on a few, I remember that. The thing that stuck in my mind was your passion and energy. You were and are a lead man. With a unique tone. You could freaking wail. 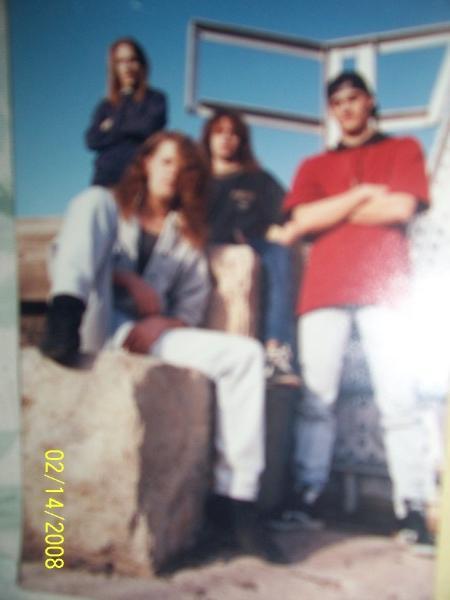 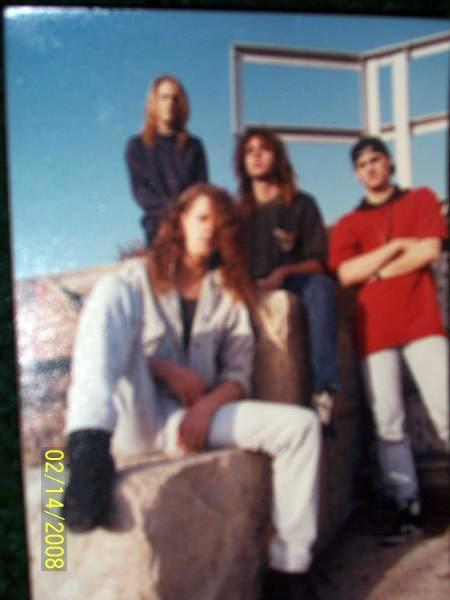 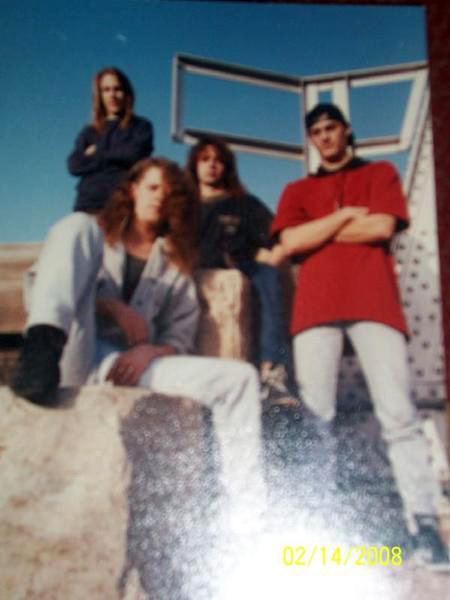 We played a few shows, and I got schooled in classic rock. I was young and I really only cared about Iron Maiden, Guns N’ Roses and especially at the time, Jane’s Addiction and Soundgarden. It was the year of Nirvana’s Nevermind album, so we played Smells Like Teen Spirit, Mountian Song from Jane’s, and Loud Love from Soundgarden.

But to play in bars in Kansas especially, I needed to learn Jet Airliner from The Steve Miller Band and other older stuff like the Beatles and Zeppelin. We played a lot of seventies rock that I had never really cared for, but learned to appreciate.

"Classic rock" songs that we played: 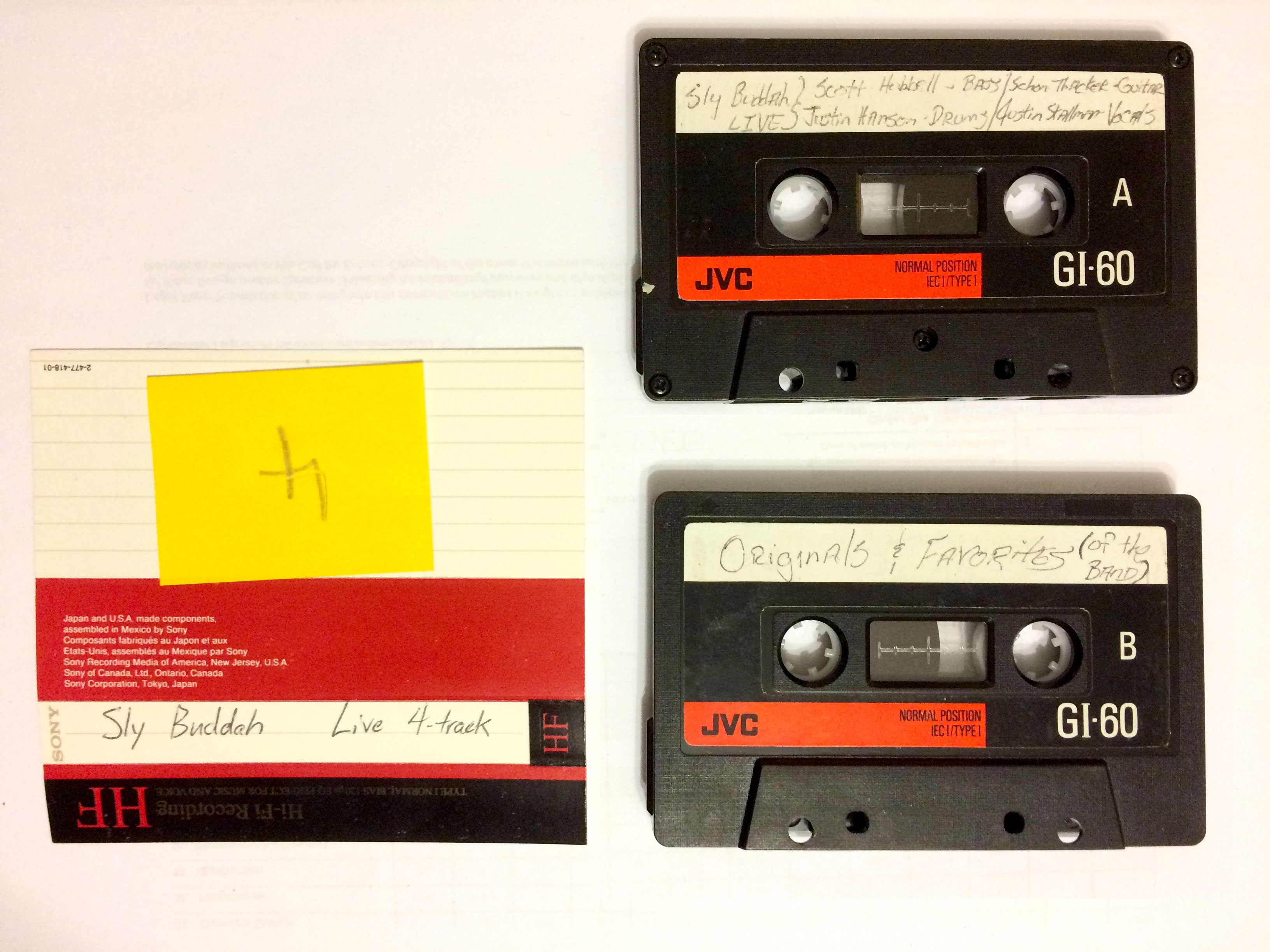 4-track tape recorded by Ian Markley maybe with the help of Darren Silkman.

Ian Markley, the guy I always knew as the Skating Rink D.J. in Hays, did sound and recorded a demo for Sly Buddah. I found that tape and here’s what was on it:

As recounted by Hubbell:

Hanson got his brand new leather jacket stolen at this gig. Before [Stahlman] was in the band. We had a way of blowing mains. Pirates Cove, 1st song..boom! I remember Schon's dad grabbing the mike and saying "Sounds like kick ass up here!" We ended up putting a tray of ice on top of the amps to help keep them cooled down.

I barely remember this show, but Scott reminded me of the high stage and the panties thrown on stage.

I think [Stahlman] did Hutch. Was my 22nd bday, so Feb 92. I road back to Hays with Darren because he had to work the next day. Then we drove back. Elevated stage. It was cool. Put a chick’s undies on my headstock that she threw on stage the 1st night. It was a biker bar. They loved us. 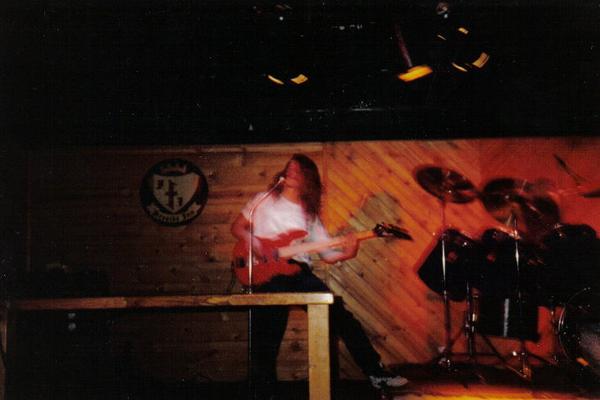 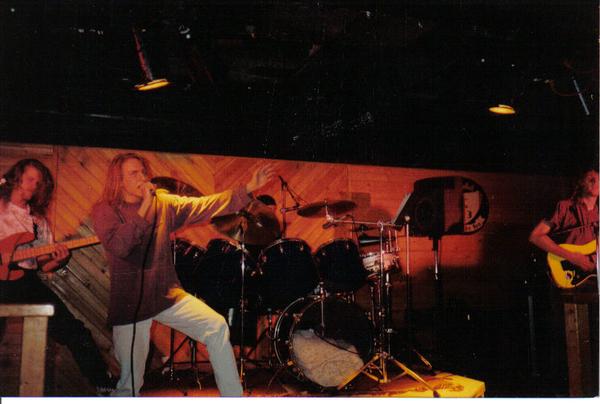 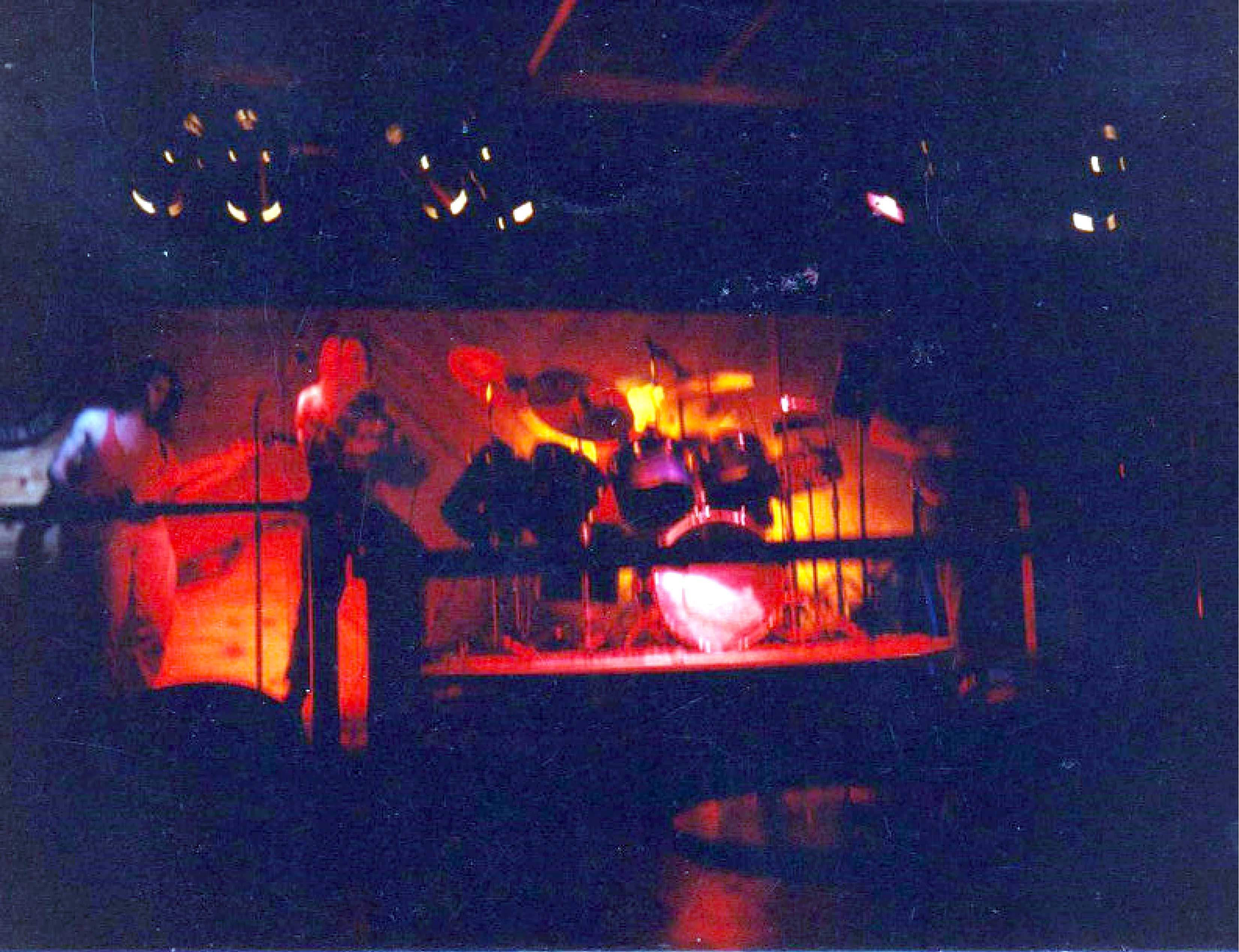 Photos of the show in Kearney, Nebraska. The Fireside Lounge was a strip club. Scott recently told me:

You just had your 18th b-day and we had the stripper come over and dance for you...lmao!

I definitely remember that. I guess that would make it January 1992. I also remember how weird it was for me, an 18-year old kid to be playing these songs to middle-aged men sipping on beer. I didn’t sing on all the songs cause I didn’t know the classic rock yet, except Zeppelin and Steve Miller. 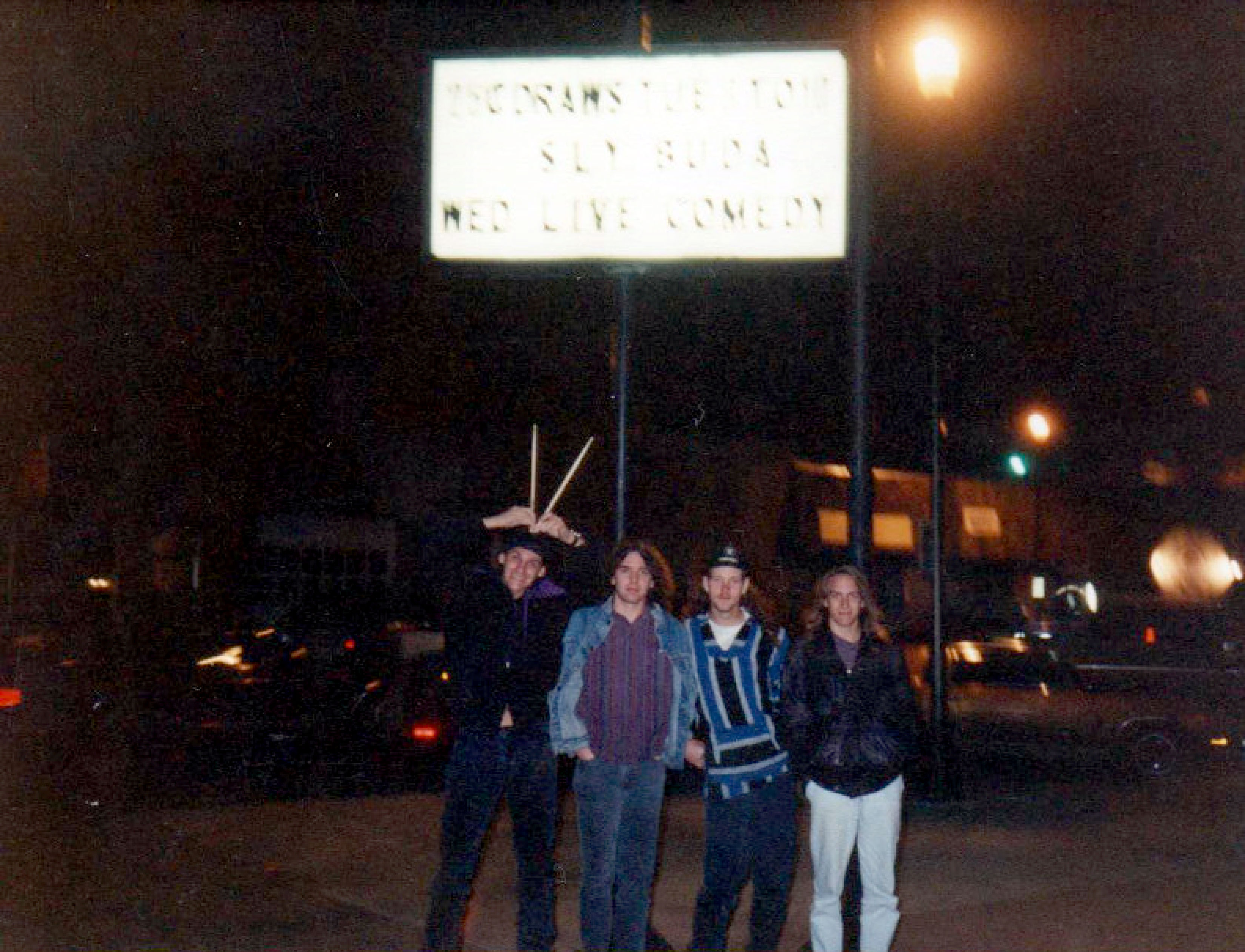 I think this was my second third Sly Buddah show. I think we stayed in a motel. I’ll never forget this show because we opened with Monkey Business by Skid Row, and on the big scream at the beginning I blew the power amp of the P.A. It just suddenly went silent like we blew the breaker, except our amps were still on.

When we stopped playing, a guy in crowd said: "play something mellow". Other people we shouting Freebird and "play some Skynard".

We turned around the monitors and just used them as the mains.

Luckily Ian Markley, who running sound with Darren Silkman, pulled out his strat and got up and played Friends in Low Places by Garth Brooks which was a big hit at the time.

Around this time I remember making a poster on a Mac Classic in the Hays High School journalism room, but I can’t find it 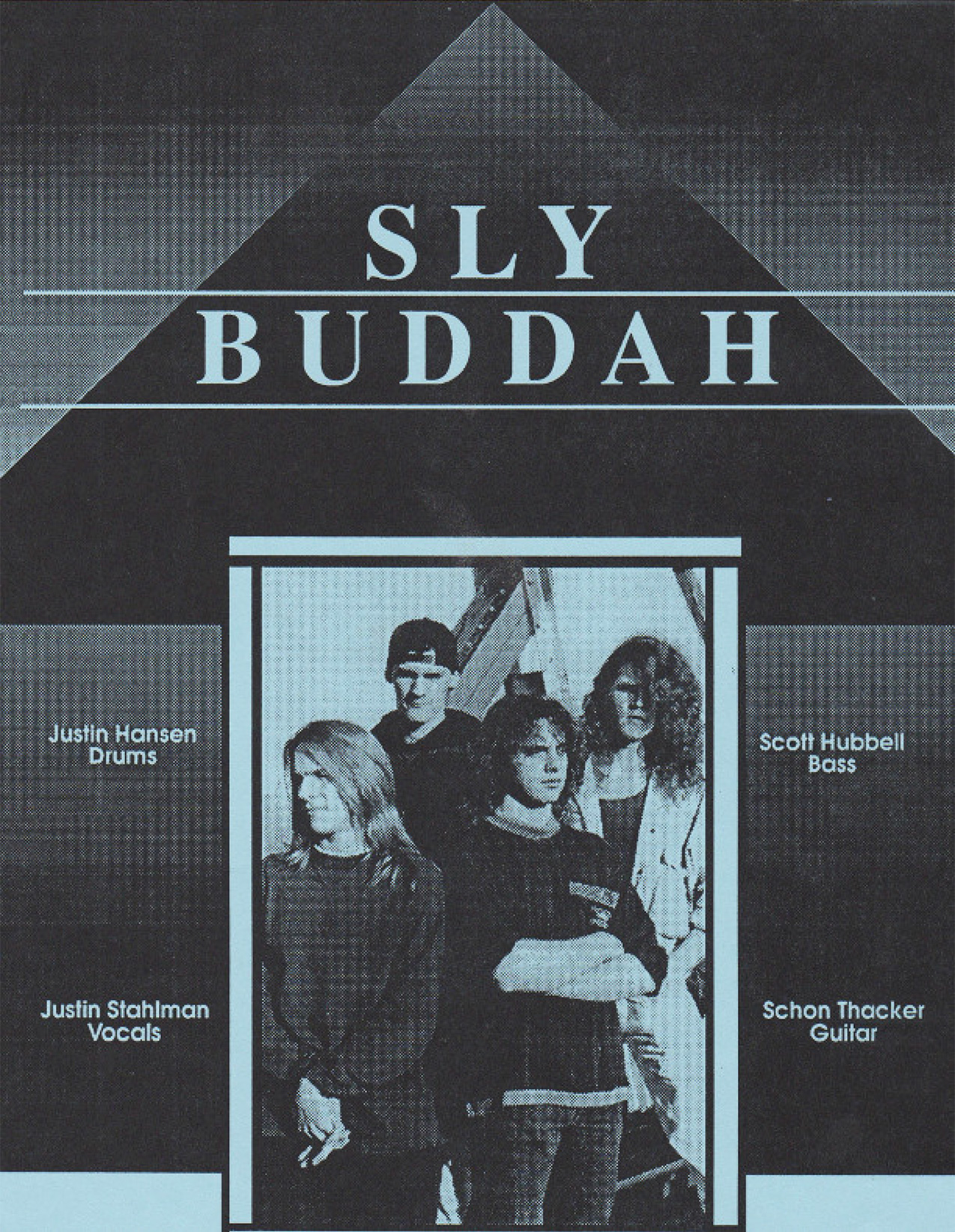 Yes, I spelled Justin Hanson’s last name incorrectly on the poster. My hands are tied in a knot.

This show was awesome, and there’s a VHS tape in Scott Hubbell’s attic that will either confirm or alter this memory if we ever get it digitized.

We got it digitized, and the tape is amazing.

We came out wailing with Nirvana’s Breed. I did most of the song without knowing the lyrics, and with a Masters of the Universe sleeping bag on my head that sort of looked like a cape.

The second third song was for Whom the Bell Tolls by Metallica. I didn’t know the words to that one either and just did the chorus. Scott Justin Hanson sang the verses. There are several high school girls in the video that remained close to the band later in life. A slow-motion shot of the crow is at the end. I think I spot Stacy Jacobs McKenna, Tavi Thacker Collins, Chastity Logsdon, Andrea Nyhoff, Sara Pfannensteil, Joshua Richards and a few others whose names I forget. 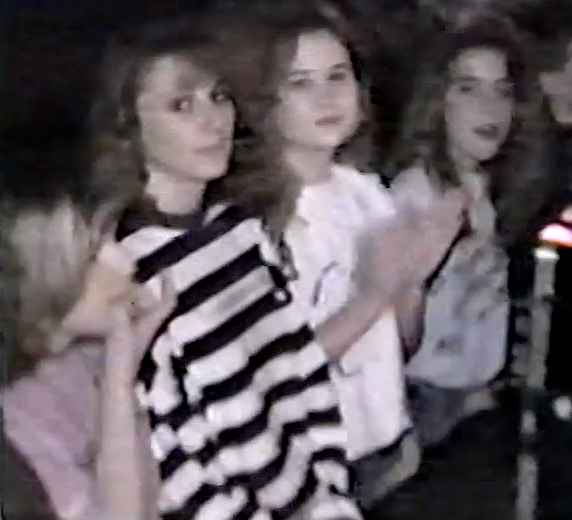 It's cool to see shots of the crowd. Who was that girl in the Zebra shirt?! 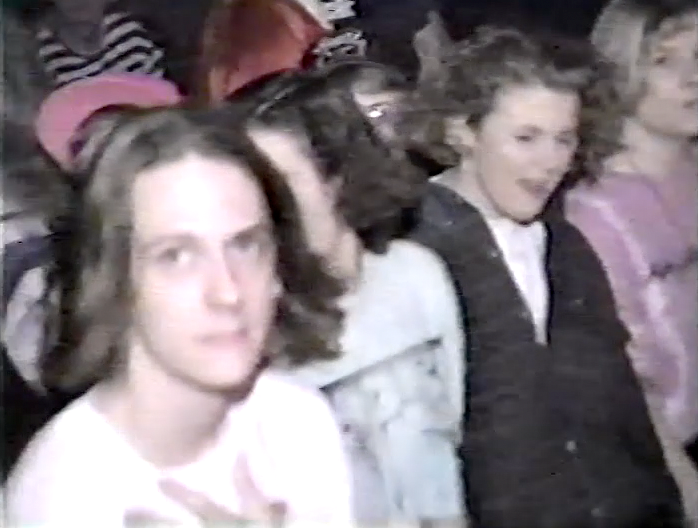 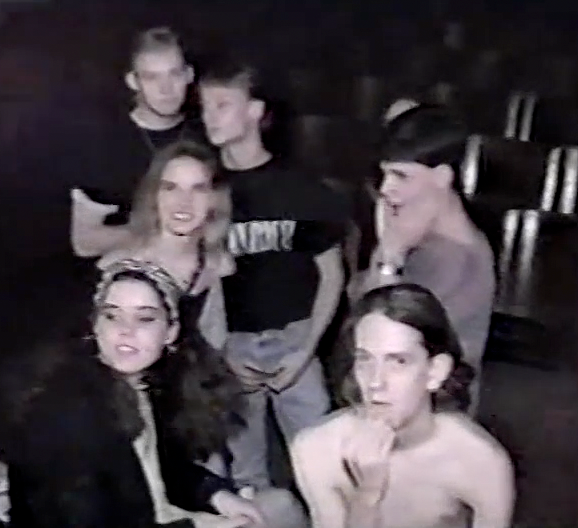 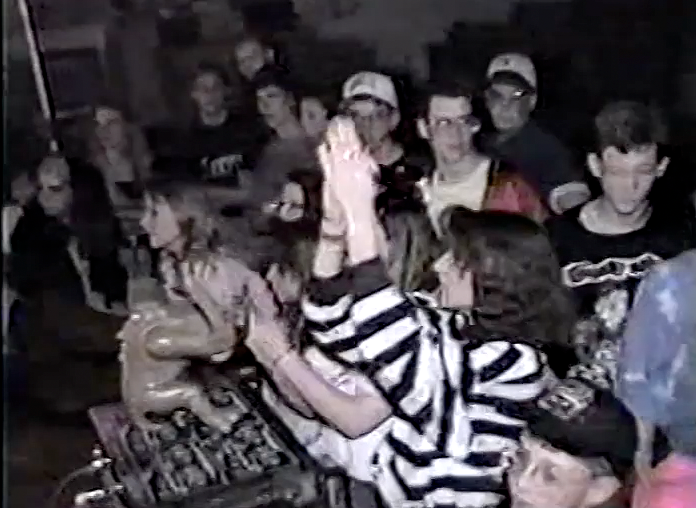 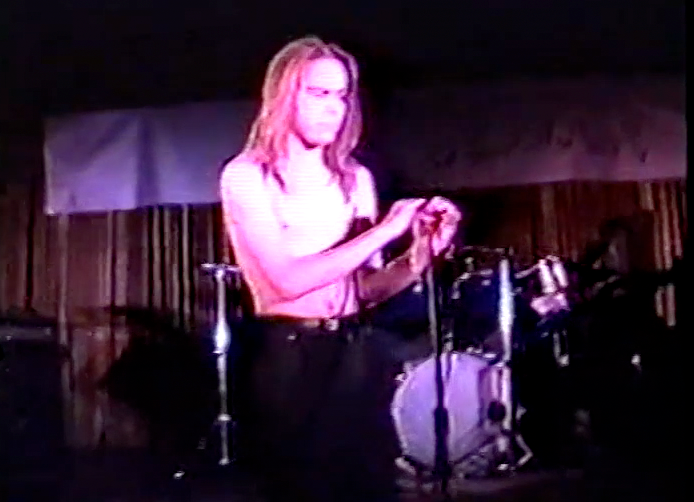 At the beginning of Loud Love. 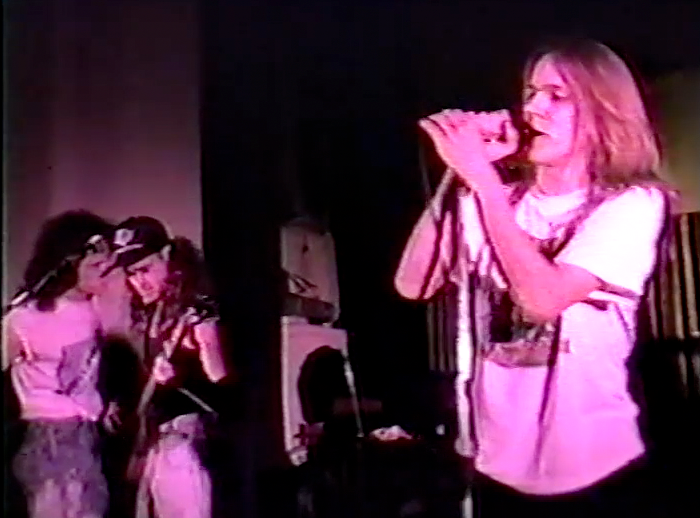 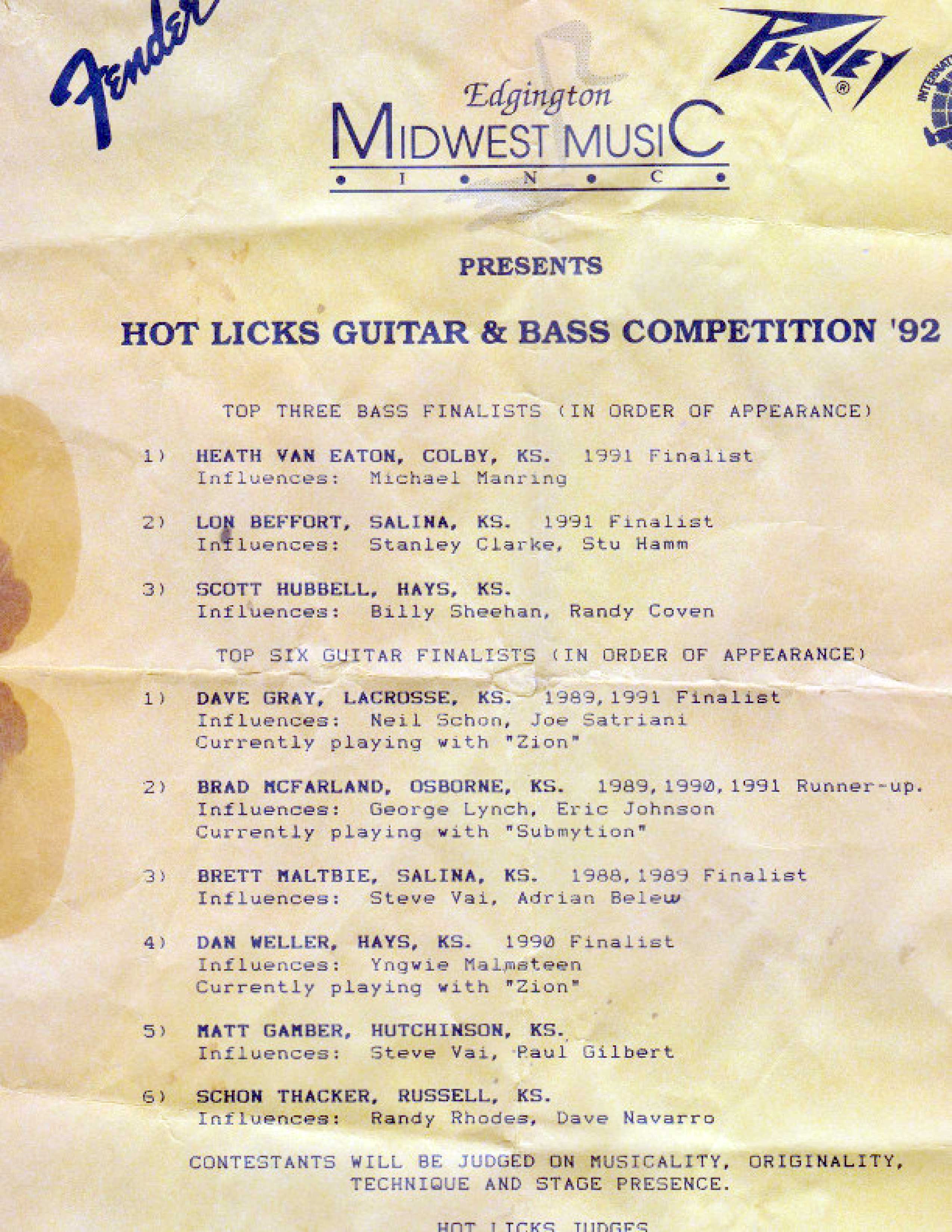 A few months after the band broke up, both Schon and Scott played in the Hot Licks competition, along with Heath Van Eaton.